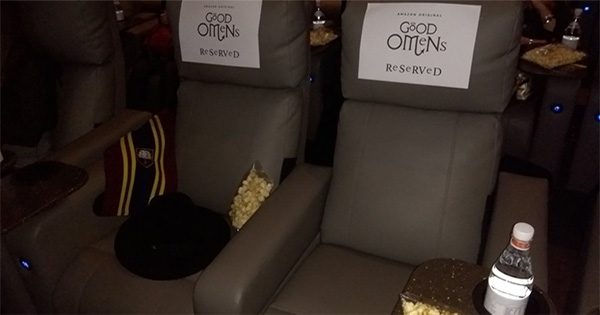 Speaking on stage at the Good Omens premiere in London this week, Neil Gaiman said “Terry always used to say to me, he’d say, ‘You know the big difference between us, Neil, is you believe that one day there’ll be a Good Omens movie[…] I will only believe it, whatever happens, if I’m sitting next to you at the premiere with a big bag of popcorn – and I don’t promise I’ll believe it then’ And I like to think, if he were here, right now, he might believe, as we made it for him. So just so everybody knows, right here, right at the front, is Terry Pratchett’s hat, and an enormous bag of popcorn.”

And indeed, Terry Pratchett’s trademark hat and scarf were placed on an empty seat in the front row at the Good Omens world premiers on Tuesday evening.

Earlier this month Gaiman had already indicated he’d be saving a seat for his friend, in this tweet

Possibly. But there’s still going to be a seat next to mine at the premiere in 3 weeks, with Terry’s hat on it next to the biggest bag of popcorn that the Odeon Leicester Square can produce. https://t.co/NeANMbNnMU

For those who have missed the excitement, Good Omens has been adapted for series by Neil Gaiman and will star David Tennant and Michael Sheen. If you weren’t lucky enough to go along to the premiere, then for us mere mortals it premieres on Amazon on 31st May!