“This is the fourth of Adam Baker’s thrillers set in the post-apocalyptic world of OUTPOST, JUGGERNAUT and TERMINUS”

The last flight of the Cold War bomber “Liberty Bell”. A museum relic charged with a final mission: deliver a tactical nuke to a classified target deep in the Nevada Desert.

When it all goes wrong, the surviving crew face a desperate battle against the punishing desert heat. But perhaps a slow death by dehydration is preferable to the alternative.

In “Impact”, Baker returns us to his virus ravaged world for a fourth time. The zombie plague has pretty much taken over and only a few isolated, desperate pockets of humanity remain, hanging on by the fingernails, witness to the death throes of the human race. 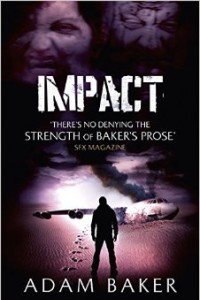 Baker’s zombie apocalypse is probably the bleakest, most nihilistic, in the genre. There is no absolution, no salvation, no happy Hollywood endings. If you’ve read this novel’s predecessors, ” Outpost”, “Juggernaut” and “Terminus”, you’ll know not to expect to see ANY of his protagonists again in later episodes. This adds a really jagged frisson of hopelessness to the story.

You’ll also know to expect his trademark writing style. Terse, tense, tight macho prose. Cut down and fragmented. Can get a little irritating after a while. In “Impact”, though, this is moderated somewhat and the story is so much more readable for it.

Also, movie references abound. Baker nods the wink to; Tremors, Alien, Aliens, Dark Star, Predator and Alive. Much amusement is to be gained from spotting them.

Perhaps not the best of the quadrilogy (“Juggernaut ” wins that accolade), neither is “Impact” the worst. Well written, pacy, tense and engaging, the parched, dusty heat of the Nevada desert is very nicely rendered. It does lack the outright onslaught of zombie legions and it suffers a little for this. And, like it’s predecessors, the protagonists are a little flat, forgettable.

Still and all. It’s a lot of fun and we can only hope that Mr B has plenty more to come in the series.