“This is the third of Adam Baker’s thrillers set in the post-apocalyptic world of OUTPOST, JUGGERNAUT and IMPACT”

Terminus is Adam Baker’s third novel and it is a continuation of the zombie ravaged world that he introduced in Outpost and Juggernaut. However, while it is a continuation, it is NOT a rehash, not a warming over of old characters and scenarios. Instead, Baker continues his ongoing exploration of the effects of the alien revenant virus as it spreads through a gradually disintegrating world.

The story follows Lupe, a New York gang-girl who has been co-opted by a team of scientists, rescue personnel and soldiers to re-enter New York (first taken over by the zombies and subsequently nuked by the government – shades of the classic North American survivalist paranoia going on here?) and extract the one scientist (a rather cornily named Doctor Ekks) who might have found a cure. Their search takes them deep into the Manhattan sewers and subway system, but what will they find there…? 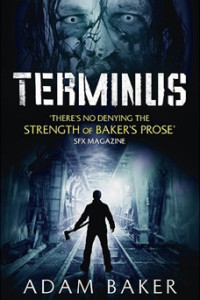 Now there’s good, bad (well, sort of) and indifferent here, for me. The story itself is well-paced and it skips along nicely, striking a perfect balance between the excitement of the classic zombie melee, tense claustrophobic searches through collapsed (nay, collapsing), flooded tunnel systems and long periods of boredom waiting for… rescue? for the zombies to break in? to die? And it IS a good story, calling on the well-known, tried and tested Resident Evil gameplay scenario, with characters galore, puzzles, traps, expositional documents and landslides – it really DOES feel like the classic computer game. The atmosphere is well-crafted too – murky, claustrophobic, cold and smelly; nowhere that you’d like to spend your summer holidays, that’s for sure.

Another plus point is that it becomes clear from the beginning that the characters are pretty much doomed, having received a healthy, bone-marrow-warming dose of radiation poisoning, they are gradually succumbing to its effects. This adds bucketloads of tension to the story and turns the determined optimism of the more typical “we’re going to get out of this if we alll pull together” schtick onto its fatalistic head. A very nice touch and one that Private Hudson would have loved; “Great! Game over man! Game over!”.

The characters are, as I have mentioned, varied and fairly interesting and again there’s a nice balance struck between the comfortably recognizable (perhaps straying a little towards the cliched?) and the anti-typical. I guess I have to say that I found the characters a little flat, wooden, samey in places. They all talk much like one another (in a stylized, hyper-macho mil-speak) and behave much like one another and a little more development and behavioural diversity would have been nice.

I have a bit of a problem with Baker’s style. His clipped, staccato delivery. Sentences of no more. Than three words. At a time*. Tends to grate. After a while. I admit that, with practise, it gets a little easier to read and it does add tension and pace, but I would prefer to see him break out of it and use the method a little more sparingly. I’ll also admit that it does force him into some rather cool, tastily descriptive (even lyrical) compound word groups…

So, this is a fine, distinctive addition to the zombie apocalypse genre from Baker; it’s good points far outweigh the occasional bad and it rattles along the tram-tracks at a decent pace, spraying blood, bone fragments and brain tissue about with gay abandon. Good holiday reading, but don’t forget to bring a length of lead-pipe or a baseball bat… you’ll need it.