Adele Parks - I Invited Her In

“Full of details about life in the suburbs of London, the story is full of emotional insights about parenting, marriage, and personal legacies. A smart, suspenseful tale about love, betrayal, and the illusion of happiness.”

The story revolves around Melanie, aka Mel, who is married to Ben. She works in a high-street clothes shop, has two little girls (Lily and Imogen) and a teenage son, Liam.

Due to an unplanned pregnancy, she left college halfway through and experienced some tough years as a single mum to Liam. Eventually she met Ben, a caring an compassionate man, who treated Liam as his own from the very beginning. However, the mother-son bond still remained a tad bit special. 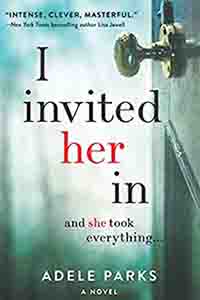 Out of the blue, one fine day, Mel receives an email from an old college friend, Abigail, aka Abi. Currently living in the US, Abi is on the verge of a divorce. She had married her then college boyfriend, Rob. Though successful in her career, she was a shadow of Rob, who controlled her every move. Shocked at discovering her husband with another woman, Abi needs to break away from the marriage.

She reaches out to Mel with hopes to rebuild their friendship – or is their something else?

Mel invites Abi to stay with them for a few days while she figures out her next move. Abi is beautiful, exciting, with a lot of spark and oodles of self-belief and charm, that Mel gets swayed by her very persona. As days become weeks, and Mel relieves her lost youth and college days with Abi, she becomes increasingly distant from the family.

In the process, she gets a lot more than she bargains for, when the full impact and revelation of her decisions and buried secrets comes back to haunt her… and her entire life turns topsy-turvy.

This is a story of the nuances of female friendship, envy, revenge and hidden secrets.

The plot, to me, was a tad predictable.

At times, I didn’t relate to some of the decisions taken by the characters and the foundation of the story, i.e. the friendship between Mel and Abi, could have been better defined.

This novel also reveals the dangers of keeping secrets buried and of revenge and regret. The truth will eventually be uncovered – the question is are you prepared to deal with the consequences?

Also, do think twice about letting old friends back into your life – one can never be sure when the friendship gets messy or terribly wrong!