“Superb… This edgy, intricately plotted psychological thriller establishes Michaelides as a major player in the field.”

Excellent debut novel by a extremely talented author, this psychological thriller had me on the edge of my seat a good deal of the time as the story unfolded. The setting begins in London, a couple, Alicia and Gabriel Berenson seem to have the ideal life, she’s a notable artist and he’s a much sought after photographer, what could possibly go wrong?

For one thing, Alicia has a history of some psychological problems from her past and in order to help her Gabriel gets her a journal to record her thoughts and those thoughts as told by her seem like everything is positive in her life. Then suddenly the journal ends abruptly and Alicia stands mute with her arms slashed after apparently tying her husband to a chair and shooting him five times in the face. She is silent, is arrested for his murder and the court confines her to an asylum where she lives her life in a drugged haze for years. 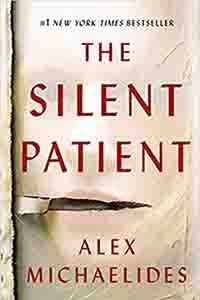 nter a new criminal psychotherapist, Theo and he is determined to break through and bring her out of her shell. With all the twists in this work, the deeper I got into the story the more I am glued and cannot stop turning the pages. Well done Alex! I do hope they make this into a marvelous movie at some point. Highly recommend reading.

Alicia Berenson is a famous painter, married to Gabriel Berenson, a sought-after fashion photographer. One evening she shoots her husband in the face, attempts suicide (from which she was revived) and then stops speaking. No amount of coaxing and therapy can get her to speak.

Six years later, she’s housed in a secure psychiatric facility, the Grove, but she still hasn’t opened her mouth.

Alicia is the silent patient – and this is her story.

Theo Faber, a psychotherapist, has been interested in her case from day 1. He makes it his life goal to be able to reach out to her and treat her someday. When an opportunity presents itself as a vacancy at the Grove, he jumps to the challenge. He applies and is selected.

Once at the Grove, he requests for Alicia’s case and vows to unlock the secrets that she has harboured inside her for so long.

Told alternatively, between the now (from Theo’s perspective) and the then (as excerpts of Alicia’s diary entries, in the days leading up to the murder), this is a dark tale of insights into the human psyche.

Theo himself is struggling with his personal life and marriage, which intertwines with his efforts to get through to Alicia. But, what is Alicia? Is she really the villain or is she perhaps a mere victim? Theo finds himself advocating for Alicia and in the process finds himself over-identifying with her. Of course, its part of the therapeutic process, since a psychotherapist needs to be able to get deep into the emotions of the patient. At the crux of it all, is an ancient Greek tragedy which intertwines itself beautifully into the plot.

A horrendous murder, a woman held captive in the confines of her own mind, and a therapist determined to unlock her secrets – this debut suspense novel is not only well-written, well-paced and tightly-plotted, it is every bit deserving of the rave reviews it’s already receiving.

Every character has something to hide, and the question remains who is manipulating whom; and who is telling the truth?

The twist at the end is mind-blowing – and despite reading maximum books of this genre, I cannot say I saw it coming.