“The novel that launched the astonishing career of one of the 20th century’s greatest writers of action and suspense.”

Royal Navy cruiser, HMS Ulysses, leads a convoy of destroyers, carriers and merchant ships deep into the Arctic Circle, heading for Murmansk with vital supplies for a beleaguered Russian Army. Waiting for them is a U-boat wolf pack and some of the worst winter weather of the war. Their orders are to get through at any cost but no-one can predict just how high that cost will turn out to be.

Alistair MacLean’s debut novel is arguably also his best and it ranks easily alongside Monsarratt’s “The Cruel Sea” as an exemplary account of the Allied Convoy War. Taking his inspiration from his own extensive experience as an RN sailor in the Atlantic and Arctic convoys there is a strong feeling of verisimilitude to this story; but the sheer quality of his writing is also worthy of note. 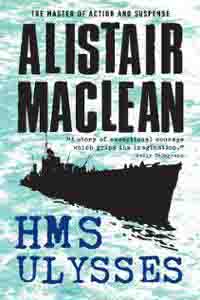 The novel introduces the Ulysses as a ship with a broken and troubled crew, close to mutiny and exhausted beyond recall from previous forays into the Arctic. However, MacLean continues to build the pressure on the ship by throwing at it the most appalling weather conditions and the privations of a ruthless, determined and resourceful enemy. tmosphere.

This is perhaps a forgivable crime because “HMS Ulysses” really is an unrelentingly compelling and indeed deeply moving paThe attrition rate is high, both in terms of the ships and the physical and mental health of their crews. MacLean does occasionally resort to some common war story tropes and cliches and one or two frankly unlikely coincidences in order to maintain the tension and age-turner of a novel.

One wonders whether there is at least /some/ exaggeration for dramatic effect: on the other hand I worried that perhaps there was none and that the navy and merchant crews really did suffer as terribly as MacLean recounts here. Either way, this is an impressive piece of story telling and a true “must-read”.