The Duke of Wellington described the battle of Waterloo as “the nearest-run thing you ever saw in your life”.

“A Close Run Thing” is Alan Mallinson’s novel about Matthew Hervey, a Cornet in the 6th Light Dragoons and his part in the battle. It was Mallinson’s debut and the first in a series recounting Hervey’s adventures.

I’m very much in two minds about this novel. Mallinson appears to be (as am I) a fan of Patrick O’Brian and took a very big leaf from the great man’s books; presenting a piece of faithful historical military fiction written in the style of the period. As a consequence, Close Run Thing reads as if it were written by one of Jane Austen’s contemporaries. 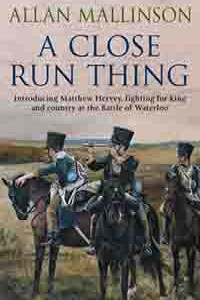 Now, I have never read more than a few lines of Austen or any other author of that period, so I take my cue from O’Brian’s own style and from the assertions of other better-read reviewers. In practise this means a slightly archaic form of language and a wordy, somewhat florid prose.

Sadly, Mallinson is (or was – I’ve not got around to his later works) no O’Brian. The Austenesque style is somewhat overdone in the early part of the book, making the reading of it a little tiresome after a while. This moderates considerably as the story progresses and it becomes much more readable, although the shift in style is a bit of a black mark, regardless of its beneficial effect.

The plot too is rather protracted. Fair enough, I suspect that Mallinson wanted to add some historical depth to the story and consequently we follow Hervey from the closing stages of The Peninsular War, via a sojourn amongst English society and an Irish police-action to (at great length) Napoleon’s Hundred Days. It is a shame though that this tour de force is so disjointed: there is little in the way of a thread of continuity between the sections and each seems to be rendered almost irrelevant by its successor.

Finally, when we do arrive on the battlefield of Waterloo, the real difference between Mallinson and O’Brien (or Cornwell, or Forester) shows. He (at this stage in his career, at least) is no writer of adventure. Whereas Jack Aubrey or Richard Sharpe would have been laying about with a sabre, parting limb from torso and up to the top of their Hessian boots in blood, guts and mud, Cornet Hervey trots about (in a manly way) from General to General, delivering the Allies from ruin by dint of his mastery of the French and German languages, rather than his skills as a horseman or swordsman.

The battle scenes are described well enough, but from afar (you would be forgiven for thinking that The Battle of Quatre Bras never happened) and on the few occasions that Hervey does enter the fray, the description of the fighting is bland, abstracted and colourless. Very genteel, as Jack Aubrey would say, but it ain’t fighting.

Perhaps I’m being unfair – it’s a decent enough read, written well and I’m pretty sure I’ll give the next in the series a go. But if you want a good Waterloo War Story, look no further than “Sharpe’s Waterloo”. If you want Pride, Prejudice and Great Murder, try Patrick o’Brian’s “Master and Commander”.