“Prowse writes gritty, contemporary stories but always with an uplifting message of hope.”

This is the third book I am reading of this author and all three have been very emotional reads that I haven’t been able to put down till I finish!

The fact that every story (love story in this case) has two sides is brought out beautifully in the two books that tell the story of the same couple..Anna and Theo.

While reading Anna, which told the story from her POV, I really felt for her..a young girl who was forced to move into care and faced many disappointments but held on to her dream of having her own loving family.A dream that was set to be realized when she met Theo.. Only to have her hopes dashed when he turned out to be unwilling to give her the one thing she wanted the most! 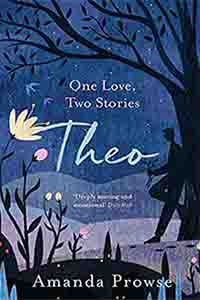 I thought then that Theo was being really unfair to not look beyond his issues and put Anna’s desires above them, especially given her life until then and his totally contrasting background of luxury and money.

The story told from his POV really raised empathy for him and his insecurities though!

Shipped off to a boarding school he hates when he is just 7 and all but forgotten by his parents who are caught up in their social engagements and their own struggles in a difficult marriage,Theo grows up feeling neglected and unwanted. His parents even forget to pick him up when the school holidays start! The lonely child grows into an adult who feels he is always the unexpected guest who arrives late and for whom no one is waiting.

While a life event in university causes Theo’s opinion of himself to fall further, his unexpected meeting with Anna in a lift proves the spark that lights his life and changes it for the better.

He craves to give her everything she has not had in life and her smile is the most precious thing in the world. But at the prospect of fatherhood, he is simply unable to commit… believing that he has no idea of what it entails and also not wanting to recreate his childhood for the child he would bring into the world.

And so Anna and Theo grapple with their own fears and try to reconcile those with the life they have and want together.

It is a very emotional story.. The plight of little Theo is heartbreaking and every time he hopes for a positive outcome in any relationship, as a reader you want to reach in and hug him. His desperation to shake off the tag of ‘weird’ that has been attached to him since childhood, his need to fulfill Anna’s desires and the conflict that rages in him are all really relatable.

Two people who together can have everything, if only the desire stemming from one’s past is not stamped out by the memories of the other.

I love the way Amanda Prowse writes about emotions.. Very palpable and real and with an ability to really draw the reader in.