“It demonstrates how the particular genius of the novel can be deployed to examine the subject of climate change in ways beyond the scope of journalism, history or documentary. Gun Island shows us how the psychological compulsions for order and security that drive our unwillingness to confront climate change are about to be first unsettled and then destroyed.”

“In the seventeenth century, no one would ever have said of something that it was “just a story” as we moderns do. At that time people recognized that stories could tap into dimensions that were beyond the ordinary, beyond the human even. They knew that only through stories was it possible to enter the most inward mysteries of our existence where nothing that is truly important can be proven to exist – like love, or loyalty, or even the faculty that makes us turn around when we feel the gaze of a stranger or an animal. Only through stories can invisible or inarticulate or silent beings speak to us; it is they who allow the past to reach out to us”

Rare book dealer, Deen Datta’s Italian friend Cinta believes in stories and advises him to trust their power too. After all, it is a story that starts Deen off on a journey he never imagined he would ever undertake. 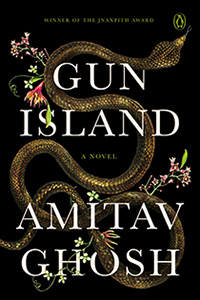 The story of a shrine to the goddess of snakes, Manasa Devi, told to him by an elderly relative, intrigues Deen and he agrees to her request that he visit it.
A startling encounter with a deadly king cobra at the shrine deep in the Sunderbans forest, rattles him and makes him restless… he doesn’t know what will bring him peace but recognizes his need to know more about the “Bondooki Sadagar” or Gun Merchant who is believed to have established the shrine.

Returning to his regular life in Brooklyn, he nevertheless keeps getting reminders of this story via his interactions with the people he met while there – Piya Roy, the Bengali American field biologist who studies the Irrawaddy dolphins and is heavily vested in their safety and works against industries polluting their habitat, Tipu, the street smart, cocky youth aspiring to get away from his village to a better future, Rafi, whose grandfather was the last carer of the shrine.
As Deen journeys from NY to Los Angeles and then onto Venice, the stories of all these people travel with him.

There are stories woven within stories.. about folklore, migrating birds, refugees who come looking for a better life and in the midst of all this is the changing nature of the environment- both natural and man made. In the form of climate changes that cause habits of migratory animals and birds to change in unexpected ways and give rise to tornadoes and hailstorms that rain down causing devastation. Also in the form of attitudes of countries and the people in them towards the refugees that are knocking at their doors in the hope of salvation – fear of losing their own comforts, thoughts of being deluged in their own countries with no way of controlling it and political propaganda make them want to turn refugee ships away from their shores. And yet, these are people who have nowhere to go back to.

I liked the merging of the issues in the present that surround Deen and everyone he encounters, with the tales of the past.
The dilemma of Deen who considers himself a rationalist but cannot always explain away startling coincidences and predictions that come true is well presented.
Ultimately, this is a journey of faith and belief, his own and that of two remarkable women he meets.
Though there are a lot of themes touched upon.. culture, folklore, environment, displacement, refugee issue.. the novel flows easily from one to the other and so I found it a very enjoyable read.