Ananda Devi - Eve Out of Her Ruins

“A novel of conversations, emotions, aspirations, and setbacks… This is a novel of haunting language with a powerful message about gender and violence.”

Mauritian literature is a new one for India, even though we are aware that Mauritians are of Indian descent. Ananda Devi traces her roots to South India but writes in her native French throwing in Creole phrases, which makes the task of translation rather challenging for Jeffrey Zuckerman. Add to that the fact that each of the characters in Eve Out of Her Ruins has his or her own voice and syntax – quite obviously because they’re all teenagers – and the task gets more difficult. However Devi and Zuckerman working together have managed to reproduce the syntactical differences of each of the characters in the series of  free flowing monologues that makes the novel. 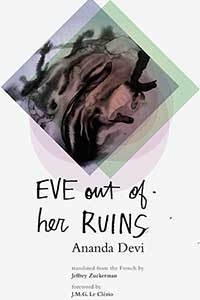 Eve, the character of the title, barters her body for money. She has her own sensual rhythms while she talks about the ebb and flow of her trade. Men take but rarely give and she flows through the turbulence of her life with her hair trailing her like foamy night; thinking in sensual poetry to rise out of her body even during the act of possession.

She thinks she is strong but the other three see her differently. Saad the poet sees her in terms of fragility. Savita supports Eve’s vulnerability and is the only person Eve actually loves. And then there is the violent Clelio, the one who hangs out with the gangs, who lacks direction in his life and who stands for everything that Eve resents in Mauritian men.

Eve is the main character of the story – the rest are sketched in with varying levels of definition and act as a backdrop. However, life for all for is a frantic quest for meaning and a better life.

A thread of violence and despair runs through it all, typical of third world countries where the have nots outnumber the haves and where young people are struggling for a way out of the darkness. Much of what happens is to be expected – the rootlessness and insecurity, the exploitation fretted by the fever of gang warfare.  However Devi describes the breeding ground for violence with a sensual edge characteristic of her style.

The humidity of the climate matches the raging hormones of the teenagers. And there is the rhythm of the sea that towers up and then crashes down on the sands again matching the pattern of their lives in a constant uneasy cycle of hope and violence. Everything appears bleak and this leads inevitably to a moment when everything appears to come crashing down, entangled in the fetters of sexual bargains and lost in the undercurrents of relationships.

Eve has her moments of escape through ‘the poetry of women’ as she calls it. Saad finds relief in books, in the poetry of Rimbaud, scrawling it across walls even as he longs for Eve. For him it is a toss up – bury himself in books or in Eve whom he cannot afford?

All this, one might say, is the fall out of colonialism. Struggling for the dregs of what has been left behind. Life in Troumaron, the dark side of Port Louis is not something that the tourists who come to revel on the golden sands of Mauritius would recognize.