“While readers are sure to get a kick out of the codenames and inside jokes used playfully throughout, Hope Never Dies is an intriguing saga that doesn’t sacrifice momentum for winks and nods.”

No matter what you think of the Obama administration, there can be no denying that President Barack Obama and his Vice President Joe Biden were genuinely fond of each other.

No doubt many Presidents and Vice Presidents throughout history have almost come to blows under the intense pressure of leadership, and no doubt Obama and Biden had their disagreements, but it’s clear that they both thought very highly of one another and the friendship the two enjoyed became especially popular online. 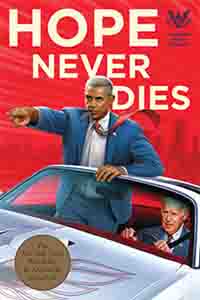 Now that the Obama era has come to an end, there are no doubt plenty of people out there who, regardless of their political beliefs, miss seeing the two pals showing their affection for each other. If you’re one such individual, then you owe it to yourself to check out Hope Never Dies.

Admittedly, the premise of the novel seems a little far-fetched. Following the unexpected and mysterious death of his favourite Amtrak conductor, Joe Biden teams up with Barack Obama to uncover the truth of what really happened. Schaffer himself describes the book as being akin to a Sherlock Holmes novel, except instead of Holmes and Watson, we follow Obama and Biden. I was expecting the book to be fun but very pulpy, it is hard to imagine the two high profile men solving crimes together, but I was pleasantly surprised to find the book is far more grounded then I was anticipating.

The novel is told from Biden’s perspective as he tries to soldier on through the turbulent times we’re currently living in. Life is made more difficult when a friend from long ago suddenly turns up dead. Convinced the death was foul play, Biden begins looking for the truth, and is soon joined by none other than the 44th President of the United States. Okay, so perhaps it’s not totally grounded in reality, but it soon becomes clear that Schaffer has done his homework when it comes to the two politicians.

I genuinely felt I was getting a sense of the two men, the way they think, and the way they work. While Obama has been enjoying he retirement from office by kayaking with Justin Trudeau and skydiving with Richard Branson, Biden’s life is less glamorous as he continues to hold public office and fights for what he believes in. Despite the close bond they share, there is clearly a divide between the two men and it creates some interesting tension as the story unfolds, though it didn’t feel as though it was there to simply for the sake of drama.

Obama, as you’d expect, is cool, calm, and collected, and always seems to have an answer and always knows what to do. Biden, on the other hand, is a little less smooth, but makes up for it with old fashioned grit and determination. The two may be different in many ways but, like Holmes and Watson, their characteristics meld perfectly together to form, as we saw during their time in office, a formidable partnership.

The book also contains a healthy dose of humour. As you can imagine, both Obama and Biden are pretty recognisable and it’s amusing to see them attempt to remain incognito as they hunt for clues. Biden finds himself sporting a Hawaiian shirt and Obama ditches his sharp suits for a pair of shorts and flip-flops. It would be easy to dismiss Hope Never Dies as mere fan fiction, which in essence it is, but I found it was far more than an author trying to lazily or cynically make a quick buck. I really get the sense that Schaffer did a great deal of research, both into the two men and in recent political events. It’s no history book by any means, but I did genuinely feel like I’d been given a little extra insight into the two men and how they operate. The dialogue between them felt authentic and they often refer to past events the two shared, such as Obama’s surprise bestowment of the Presidential Medal of Freedom upon Biden and the many obstacles Biden and Obama faced when they first began campaigning back in 2008.

If I have one criticism, it’s that the mystery part of the story isn’t as interesting as other famed thrillers, but it was still engaging enough and, when coupled with the two protagonists, is still perfectly serviceable. It may not be quite as compelling as the likes of Agatha Christie or Stieg Larsson, but it gets the job done and, lets be honest, it’s Obama and Biden that are the selling points here.

Overall, I found Hope Never Dies to be a very enjoyable read and is the perfect book if you’re looking for something easy, fun, but engaging to read this Summer. Sure, it may not be particularly high brow or deep, but it’s not trying to be. I get the sense the author knew exactly what he wanted to achieve with this book and its tone, humour, and message are consistent throughout. That’s also not to say that there weren’t moments that had me reflecting on the nature of politics, whether any president can hope to install lasting change, and what the future holds for the United States.