Anne McCaffrey - The Dolphins of Pern

“McCaffrey here adds yet another dimension to her colorful and vivid saga.”

The Dolphins of Pern is another masterpiece by the late Anne McCaffrey. Instead of dragons, this book focuses more on the growing relationship that dolphins have with humans.

A young man becomes increasingly interested in dolphins due to an experience as a child, but his mother forbids him to have much to do with them. Eventually he gets fed up with her restrictions and, using the aftermath of a storm to get a head’s start, leaves to start a dolphin hall. 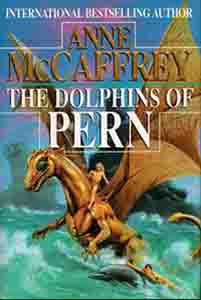 This is one of my favorite Anne McCaffrey books. I absolutely love the relationships that are developed not only between the humans, but between creatures and humans as well.

The dolphins have the ability to speak a limited amount of words, and the reason they were brought to the planet originally was to help the fisherman find fish and to warn them about storms and other dangers of the sea, as well as help sailors during storms. Anne McCaffrey does a fantastic job of depicting the dolphins. The way she described them as well as the way they talked was exactly how I pictured they would talk if dolphins could do so in the present day. This story is filled with excellent descriptions and fantastic character development.

As with most of Anne McCaffrey’s later stories in Pern, it is better to have read the stories written up to this point to be familiar with the characters depicted. While it is a bit of a stand-alone book, it is a stand-alone within the series so readers new to the series should start with Dragonflight and continue the series from there. I didn’t like how the mother treated the son, but it was a crucial part of his character development so it’s more of a dislike of the character than how the story was written.

I give this book 10 out of 10 starts and recommend it to lovers of fantasy ages 18 and above or 16 and above with parental discretion. Although there is no sexual reference in this book that I can recall, it does happen within the series.