“A novel that demands and rewards the reader’s concentration, this is a dazzling return to form.”

Just finished The Ministry of Utmost Happiness by Arundhati Roy. This is a story in 2 parts. The first part is the story of a young boy named Aftab, who is born with both sexual organs. The child is brought up male, but as he grows older he finds himself drawn to the Hijra, the transgender class in India. He finally abandons his home for their sheltered community. He then becomes Anjum.

She will live there until the community begins to fall apart over a child she brings into the house that she wants to raise as her mother. She leaves and begins a life in an old, forgotten cometary.  An old lover builds her a small shack and she will live there, burying the dead of those undesirables that have no place to be buried. 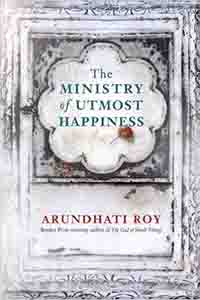 The second part of the book is the story of a woman named Tilo, and the men who lover her.  Amongst these men are Naga, who is employed by the Indian government in their intelligence division, and Musa, a revolutionary. This part of the story deals with the problems between Kashmir and India, the problems between the Hindus and the Muslims and the trouble amongst the castes in India itself. It deals with murder, torture, revenge and betrayal. It is long and sometimes slows the book down with its excessive wealth of material. The book will come full circle to a sad but satisfying ending. At 450 pages at times it was a struggle, but the beauty of the authors writing made it worthwhile.  There is much in this story. While it deals with the Transgenders, it is not about sex, but about emotion, love and loyalty. It’s about how on the worst of times, people will find each other to help get through our lives, no matter what your situation. This book is not for everyone, but it was a terrific experience to read it. Well worth giving it a try.