“An urgent, intimate hybrid of memoir and fiction, HOMELAND ELEGIES thrusts us into the heart of a father-son relationship and in the process – improbably – does nothing short of laying bear the broken heart of our American dream turned reality TV nightmare… Stunning.”

This highly praised book reads more like a memoir then a novel. The narrator has the same name and profession as the author and he also has a Pulitzer winning play. The authors father was a highly acclaimed specialist in Cardiology as is the narrators father and they both once had Donald Trump as a patient. So, the memoir element is obviously there.
But the stories in the book about his parents and family back in Pakistan, how he felt while visiting there, and how he and his family were treated, especially after 9/11, make for very interesting excursions into the emotions of these Muslim people. The main character is not really religious, and his encounters with some rabid anti-Muslims are very telling about how those who, while of the Muslim faith, still felt that they were Americans and did not approve in any way the attacks that occurred felt about America after the attacks. The stories concerning his family back in Pakistan at the time of the attacks is in stark contrast to his own feelings as they feel America got what it deserved. In his award-winning play that issue is explored by a statement in the play praising the planning and the audacity of the attacks. 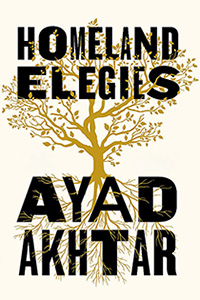 The relationship of the son and the father is a main element of the book and the stories regarding them are the highlights of the book in my opinion. The stories of the authors life outside his family are also very interesting.

The book was narrated by the author himself and he does a great job. His mimicking of his Fathers voice brings a real reality to his story.
The book has been named a top ten book by the New York Times and is on many lists as one of the best books of the year.
The book to me was in a way a learning experience, compelling in so many ways. A serious and important book not to be missed.