“An interesting book detailing the history of the front covers of Albums, being Vinyl or CD.”

This book would have lacked merit without the inclusion of the Ohio Players. I wasn’t born when those albums were released but I can imagine the delight when fans ogled the photographs. All those sexy ladies! One wore a leather thong. Another fed a red apple to a black stallion.

The image selected for this tome was of the Fire album showcasing a woman wrapped in a fire hose. (I thought the caramel-complexioned siren with honey poured over her body was the most compelling image.) One detail I hadn’t noticed was the long red talons on the model’s hands. Usually, those look repellent but it works on this picture. 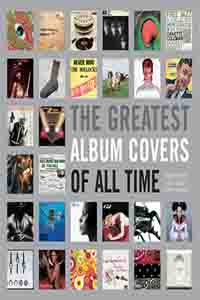 As for the entire book, it discusses album covers from the 1950s to the early 2000s. The first artist mentioned is Frank Sinatra. This is fitting because he was “the first to use the packaging to its fullest advantage” (Miles, Grant and Morgan 10). I would’ve guessed Elvis was the first. Pardon me, Mr. Sinatra. Even though I love jazz, there are still albums I have yet to be acquainted. Thelonious Monk and Sonny Rollins. Ella and Louis. Change of the Century by Ornette Coleman. Striking images that I had not seen until this morning.

If I like one song from a musician and their album art captivates me, I’ll buy it. Two albums in my collection that stand out include Previsão de Tempo by Marcos Valle (1973) and Who is This Bitch, Anyway? by Marlena Shaw (1974).

The first single “Flamengo Até Morrer” convinced me to buy Previsão de Tempo. “Loving You Was Like a Party” seduced me into supporting Marlena Shaw. Previsão de Tempo displays Marcos Valle underwater in a pool. Tranquil, indeed. Who is This Bitch, Anyway? presents a stern, poised expression on Marlena Shaw. I feel blessed to own these rare albums and overjoyed to have my consciousness expanded with this book.