Bernard Jones - The Discovery of Troy and its Lost History

“A groundbreaking book that will hopefully lead to archaeological efforts to support his educated theories and inspire continued research into the field.”

I liked reading “The Discovery of Troy and its Lost History” by Bernard Jones who put 30 years of research into this excellently organized and scholarly work which is heavily documented in endnotes, maps, and other resources.  This brilliant author has a lifelong passion to study the ancient city of Troy and he reveals novel discoveries which make this book an interesting and amazing read. 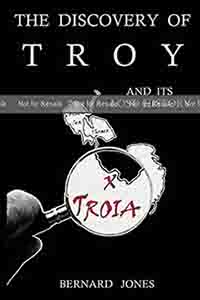 Enjoyed it very much!

We were given a free copy of this book by the publisher.  This review, however, is our opinion made irrespective of being given a free book.

The house system at my secondary school was named after ancient cities. Ever since being put into ‘Troy’ I have felt an affinity with the lost city and I’m sure this inspired my love of Greece. Like most scholars, I accepted the excavations by Schliemann in the 19th century to be those of the ancient city. Having read ‘The Odyssey’ and ‘The Aeneid’ there were inconsistencies that perhaps didn’t fit with this discovery but I put those down to artistic licence or the writer’s imagination. Bernard Jones, however, has made it his life’s work to prove that Troy was never situated in what is now Turkey but is located somewhere else entirely.

When you read this book, you will begin to read his theory with total incredulity as it turns everything we have come to know about Troy and the Ancients on its head. Little by little Bernard Jones builds on his theory with intricate linguistic and geographical research yet his findings seem almost impossible to believe. If his theory is correct, and he has spent thirty years researching it, then it rewrites history. There are so many things which suddenly ring true if you believe his theory yet even then it feels like the reader is suspending truth in mid-air.

There are a couple of questions that occurred to me as I read this book. If Bernard Jones is correct – and his theory seems to lack any significant archaeological evidence – why are there no physical remains of such an important city? Even in the area that Bernard Jones has stated as the location of Troy, surely there would be some physical evidence to support the theory? Secondly, if Schliemann didn’t discover Troy, then what archaeological site did he discover?

Historians have wondered for centuries about the location of the city of Troy; some arguing that the city never existed at all.  Bernard Jones is not the first to question Schliemann’s findings but whatever you believe, this book will make you question what we know and you will read the Iliad with new eyes.

Bernard Jones’ new book The Discovery of Troy and its Lost History uncovers many surprising but viable theories about the Trojan War, particularly its location. At first, the idea that Troy could not have been in the Aegean, as Jones argues, may seem surprising, but Jones presents numerous details to make his argument plausible. I do not want to get into too many details because I don’t want to give away the epic journey Jones takes readers on, but while I admit I am no expert on Troy, I thought his arguments appeared very plausible overall.

For example, one argument is simply that scholars have never been able to understand the chariot warfare that takes place in Homer’s Iliad because the landscape would not have warranted it—however, such warfare could have taken place in North Western Europe.

Jones goes into detail about chariot warfare and the specific location where the battles likely took place that made up the Trojan War, and with just as much detail, he discusses a myriad of other clues that reveal the location of Troy, the Trojan War, and even Aeneas’ journeys, clues taken from the Iliad that relate to such details as tides, constellations, music, and many other references made by Homer.

The Discovery of Troy and its Lost History at first might seem like a daunting book since it runs to 388 pages, but the main text is only about 296 pages (the rest is appendices of genealogy charts, photographs, a bibliography, and index) and the main text is in a fairly large print and also filled with pictures. I was able to read it in about six hours, so it was not overly daunting, but I have to admit it’s a book that deserves repeated readings to grasp fully all the fine points of Jones’ argument.

The overarching argument works well, and begins early on with the argument that Troy could not have been in Turkey and then the revelation about its exact location. The rest of the book provides the evidence, most of it directly referencing Homer’s Iliad, to explain how a setting in what is today’s Turkey would be impossible. I found the arguments compelling throughout, and I was also grateful when Jones would stop to recap the arguments to make sure the reader was keeping up with him. Ultimately, he leads us to the exact location of ancient Troy.

In a few places, I have to admit I thought the argument went off into tangents for a few sentences or paragraphs, or more information was presented than needed, such as in explaining druidism, but overall, I found the argument interesting. Readers less familiar with ancient European history will find these additional details probably more helpful than I did since I’ve read so much about British history in particular.

Of most interest to me, because I have long been interested in King Arthur as well as the British claim to be descended from Brutus, who was a descendant of the Trojan Aeneas, was Jones’ argument for valuing the ancient and classical traditions that have come down to us. Unlike the fairly recent book Brutus of Troy by Anthony Adolph, which argues that the various nations that claim descent from biblical and Trojan people created falsified genealogies to link themselves to these records after they were Christianized, Jones argues that many ancient literatures and indeed an entire history of Western Europe that dates back to about 2000 BC exists that has been largely lost to us, largely because people like St. Patrick destroyed pagan records and the English forbid the Welsh language to be spoken so many of its traditions were lost. Jones argues that based on what remains from these traditions, we can see that they were accurate, as was Homer, in what they depict. I have heard these compelling but questionable arguments before, but while Jones does not go into great detail about them, he gives a few examples from pre-Christian sources to back up the statements, and his uses of genealogical, historical, and geographical clues from these ancient Western European traditions to determine the location of Troy make his argument convincing.

In the end, Jones is correct in agreeing that his discoveries do not change anything we know about Troy’s history, simply its geography. While I am usually somewhat skeptical of such arguments that attempt to assert a particular country’s superiority as a sort of chosen race/promised land emblem—the poorly researched yet popular book Drama of the Lost Disciples of Christ by George Jowett, which claims Christianity arrived in England before Rome, comes to mind—Jones backs up all his arguments and provides sources.

Everyone is not going to agree with Jones’ argument, or at least will find various points in it to disagree with. But that is all right. The book is a monumental achievement of years of hard work, and even if some of Jones’ argument in time is proven to be wrong or to need more research, The Discovery of Troy and Its Lost History is a groundbreaking book that will hopefully lead to archaeological efforts to support his educated theories and inspire continued research into the field. After all, King Priam and his people deserve to have the truth known.