A fascinating idea forms the core theme of this book… What if we actually lived in a multiverse with versions of us existing for every possible life choice made?
Jason Dessen is a Physics professor who once dreamed of doing groundbreaking work in his subject but his life took a different path when he chose family over career at a critical junction.

After fifteen years, Jason finds himself suddenly accosted with the possibility of him having chosen an alternate path at that juncture and is faced with losing the wife and son he loves. 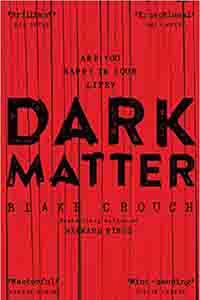 Through a maze of impossible seeming occurrences that border on the fantastic, Jason tries to get his life back.
Execution could have been way better is what I thought after reading this book again after three years!
But the biggest takeaway is that we cannot go back and change fundamental life choices or wish for the lives we may have had. We can only make the best of the life we do have.

Dark Matter by Blake Crouch is one hell of a masterpiece. Anyone who said this book was bad, then there is something wrong with you, not the book. This is a Sci-Fi novel and simply my third favourite Sci-Fibook of this year.

The story started off with a main character named Jason Dessen. He’s a college professor, has a beautiful wife and a lovely son. A wonderful family. One night, when he wants to get back home after work, a mysterious masked man kidnapped him and brought him to an abandon warehouse. He gets a nice blow to the head and the last words he remembered before passing out was, “Are You Happy In Your Life?”

Later on, Jason found out that he was waking up in a laboratory, surrounded by men in hazmat suit. He was confused, he tried to call his wife but it was someone else who answered it. Chaos ensues, he tried to escape the lab and find out the truth himself. I don’t want to talk much about it, it’s better to experience it yourself.

If you like Passenger by Alexander Bracken and V.E Schwab’s A Darker Shade of Magic, then this book is for you. It has something to do with time travelling, parallel universe kind of thing. Even if you’re not into quantum physic, give this book a try, it’s really worth your time. Overall, I love the writing style, great plot twists and turns, lots of science stuff going on, fast pace, terrifying and yes very thrilling! Another five stars from me, recommended.