“A riveting introduction to one of the seminal battles in U.S. History. The War of 1812 folk legend of Old Hickory rides high on his horse again in this engrossing overview for readers of all ages. Highly recommended!”

This short narrative of 232 pages, not including Index, Notes or Bibliography is a well written, light read about the famous battle of New Orleans on January 6, 1815. 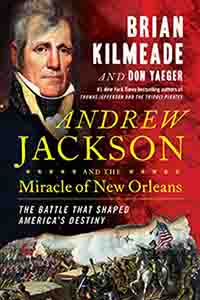 Jackson, who is currently much aligned over his status as a slave holder and his legislation, passed while he was President, that created the Trail of Tears, which was the removal of Native Americans from their ancestral lands to reservations in the West, here is remembered as the great General he was, as he saved New Orleans, the Mississippi River, and the westward expansion of the United States from a British Invasion during the War of 1812.

Jackson was the only General who stood between Great Britain gaining control of the most important waterway in the young US. If they had succeeded in winning this battle, they would have controlled the Mississippi from Canada to the Gulf of Mexico, thereby disrupting trade and commerce which would have crippled the young nation.

With no formal training in Military strategy he took a group of men from all different levels of society and defeated one of the strongest armies in the world. He not only won the battle, the difference in casualties between both armies is stunning in a battle of such importance.

The battle is thoroughly covered in detail in the book, and as you follow Jackson’s movements throughout the southeast, you will marvel at his natural instincts in not only battle strategy, but leadership in a level probably not seen since George Washington.

This is a terrific book for anyone who wants to learn about this battle, and it’s a good introduction to Jackson the Man, who would eventually become our ninth President.