“Lively, entertaining and well-researched . . . The greatest surprise of Forget the Alamo is its clear-eyed explication of the ways politicians, educators, writers, filmmakers and TV executives used the Alamo to serve whatever message they were promoting.”

Just finished Forget the Alamo by Bryan Burrough, Chris Tomlinson and Jason Stanford. Non-Fiction.
As the title states this book is about the true history of the famous battle, of the three famous men who died there, and a history of how the myths and legends grew after the battle, how the grounds where the battle occurred have been treated, and about the plans in place to totally reinvent the area with a new museum with artifacts donated by Rock Star Phil Collins who is an active Collector of Alamo memorabilia.
The battle is placed in a different context then what we learned in school and what we saw on Disney’s Davy Crockett shows starring Fess Parker as Davy, and the John Wayne film. The truth of the battle is very different then what was in the movies and the lives of Crockett, Jim Bowie and William Barrett Travis were not as heroic as we were taught. Slavery played a huge part in why so many men who had emigrated to Texas when it was under the control of Mexico needed to secede from Mexico as slavery was illegal there. 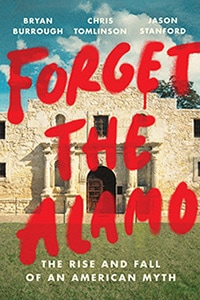 It is very interesting to see how the legend grew over time, how the battle site, now consisting of only the famous chapel and part of the long barracks, was saved from misuse and total destruction by the daughters of Texas liberty, and the eventual problems that were caused under their watch.
The other very important subject that is discussed at great length is the portrayal of Latinos who fought on the side of the Texans for independence, making this war one of race. Latino children in schools were treated very poorly for years. The fact that Latinos played a huge roll in the fight for independence was ignored for too long.
While I don’t agree with all the authors viewpoints, and I must admit I myself have always had an avid interest in this part of history, even having visited The Alamo twice and the San Jacinto battlefiefld once, many of their points are right on the mark. The history was clearly distorted in so many ways.

If your a history lover or you are a fan of the Alamo then this is a book that you should read. For others, it is a good lesson on how history is too often presented as the story we want it to be, not necessarily the most accurate one.
Also, the Alamo film starring Billy Bob Thornton is a pretty accurate portrayal of the actual battle, and one of the authors, Bryan Burrough, wrote Public Enemies, that terrific book about John Dillinger and the other famous criminals from the era, which was made into a terrific film starring Johnny Depp as Dillinger.