Caitlyn Jenner - The Secrets of My Life

“The memoir is funny, shocking in parts and above all incredibly honest”

I admit that I was more than I bit skeptical when the news came out that Bruce Jenner, Olympian Gold Metal winner was a trans-woman and was now going by the name of Caitlyn Jenner. Maybe my view was just another stunt from the made famous by reality television show “Keeping Up With the Kardashians” family of which he was a part of in one of the few shows I watched.

After three failed marriages and six biological children, having reached the age of 65, Bruce is gone and Caitlyn was finally freed. I can only feel empathy for her, all the years hiding the person you always should have been but nature deemed otherwise but she’s not alone. Caitlyn now has a platform on which to speak out and share her story for others, who hide because society dictates that they are not normal. 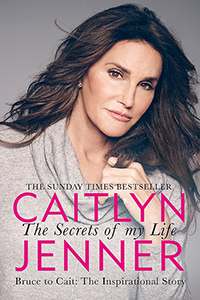 Try as they might some Christian conservatives try to promote conversion therapy and other harmful methods because they refuse to believe that people are what they are on the inside and they want to be themselves and just be happy being who they are, loving whom they want and living a life that’s fulfilling. I’m glad that Caitlyn wrote this work and shared her journey, perhaps it might help the many others who are trans or are in the LGBT community.