Exposing Data Bias in a World Designed for Men

“Brilliant … Invisible Women lays out in impressive detail the many ways that human beings are presumed to be male, as well as the wide-reaching effects of this distorted view of humanity”

Caroline Criado Perez’s Invisible Women: Exposing Data Bias in a World Designed for Men is a book that highlights the ways in which our world is designed for the default male while (often without meaning to), negatively impacting women. Our world, in which phones and bricks are too big for women’s hands, bulletproof vests are not designed for female bodies, medications are not tested on women, transport is not planned around female travel patterns, and many other things that will make you despair at a system that has forgotten to take into account half the population. 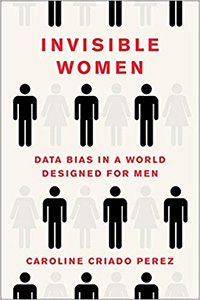 Invisible Women starts with a preface and an introduction that opens the book, explaining the ‘default male’ that most of modern society is designed around and briefly outlines the author’s intentions in writing the book. The main bulk of the book is then broken into 6 sections; Daily Life, The Workplace, Design, Going to the Doctor, Public Life, and When it Goes Wrong, before concluding with an afterword. Caroline Criado Perez’s research and statistics cover a whole host of different topics and aspects of life in which the ‘default male’ is an issue for women including; public bathrooms, work-life balance, parenting, medical research, phone designs, car crash testing, transport, women’s rights and even rebuilding after natural disasters. There is very little Perez doesn’t touch on, although she admits herself that she could not cover every subject in depth as most could create a whole book by themselves.

Invisible Women is a brilliantly interesting read that shines a light on some of the lesser-known ways in which women are at a disadvantage in our modern world while also adding more detailed information to things many of us already know such as the gender pay gap. The sheer amount of research undertaken by Perez is obvious not only in the information she presents throughout her argument but also in the masses of endnotes and long index at the back of the book. Yet, she also highlights the issues surrounding data particularly when it hasn’t included female participants and has not been effectively conducted to sex-disaggregate the data outcomes.

Invisible Women leaves no stone left unturned in its campaign to reveal the gender data gaps riddled throughout every aspect of modern life. This book is a feminist must read but should also be read by every politician, manager, city planner, designer, doctor, and anyone else willing to listen, to enlighten them to the dangers of leaving data gaps and move towards plugging the holes.