“This superbly researched and harrowing book…The squalor is ghastly but the sheer sadness of Cobain’s brief life is beautifully conveyed here. Cross has painstakingly accumulated a wealth of telling detail…”

“What if I ride? What if you walk?
What if you rock around the clock?
Tick- Tock. Tick Tock”
REM, Automatic for the people

Reading Heavier that Heaven took me a bit over than a month. It never takes me that long to finish what I’m reading.
Never, for anything. 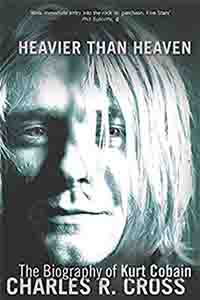 If I had to rate the book, I wouldn’t be able to. Because with what Charles Cross did, you don’t read something.
You live it. At least for a short while.
I spent 30 days, listening to all the songs, mentioned there. Researching about Seattle’s music at the time. Reading Rolling Stone articles. Looking at photographs. Watching interviews on YouTube / one of the few occasions when I’m glad modern technology’s in my life/ .
OK, all this might have taken less if real life wasn’t knocking on my door every morning, reminding me I need to be part of society.
And when I attended whatever social events I was expected to, to the question
” So, what are you up to these days? ” , I’d answer : “Oh, well you know…Nothing much. I’m reading this awesome book about Kurt Cobain”
And- imagine my surprise- when every time, upon hearing that, they’d all go like ” Oh, really? By the way, the first time i heard of him was when ….”
And then everyone had their story and experience to share about him and discovering Nirvana for the first time. Different, with often quite polar impressions on him. But everyone had something to say.

Heavier than Heaven is not just a biography, sterile facts put together in a chronological order / that’s the picture that pops in my mind when the word “biography” is mentioned/ , describing the life of a man, who decided not to be part of this world at the age of 27. It isn’t about an addict, or a failed parent, or a depressed grunge star, the result of a failed family, or someone whose love relationship was considered a total disaster.
Hell, i didn’t even care who’s right or wrong in the constant debating over who’s worse- Courtney or Kurt.
Because that didn’t matter. And the book doesn’t discuss this. While I read I didn’t even care if all that actually happened.
What matters is that Heavier than heaven made me think that artists were artists in any sense of the word. More often off stage than on it. They didn’t need reality shows to make the world see them, or 30+ people to write THEIR songs. That a real musician could go on stage, completely out of his mind and still deliver an unforgettable show. That they played just for the sake of music, and money would come soo much later in the game.

I’ll stop here, because the attempt at review I’m delivering here begins to look like a rant of a 60-year blogger on teenage behavior.
Just read the book if you’re a fan. Even if for the final scenes and the awesome music mentioned there. Because even if you don’t love it, it will make you feel something.