“This is a hilarious book. You’ll laugh at the universe Charles Yu creates, kitty-corner to our own and just so off-kilter―and then, without warning, you’ll be pulled under by the riptide and everything will suddenly make beautiful, perfect, heartbreaking, unexplainable sense.”

Just finished Interior Chinatown by Charles Yu. Audio book version narrated by Joel DeLa Fuente.
This story which reads like a screenplay is about Willie Wu, an actor who has small parts, mostly in a cop show called Black and White. Willie plays many different roles, always the stereo typed chinaman, and he longs to play the part of Kung Fu Master, which is the largest Chineese part in the show.
The typical ways that Chineese had been portrayed in films is all here, including info on the many immigration issues that Chineese faced when attempting to migrate to this country. 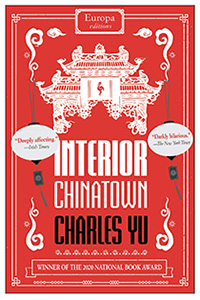 We also learn of his personal life and his family, and His problems of dealing with being stereotyped throughout his career.
Very funny at times, this book won the 2020 National Book award in Fiction.
It is a quick, very well written and a very thought provoking book. The narration is well done. Recommended.