“Mooney’s cinematic eye, unerring ear for vivid dialogue and deft touches of humanity combine to turn this novel into a rousing read.”

An interesting book this one, telling the story of a CIA black opps operative on a long term job to encourage and protect an IT specialist who is developing an ‘invisibility suite’ for the US Army. But who is the real enemy here?

The story begins five years before the main events told here when a new laser rifle that can blind whoever it is aimed at, is stolen. That time he saved by one of his team. What he doesn’t know is that not only are there enemies after him, but one of them is actually protecting him at the same time. 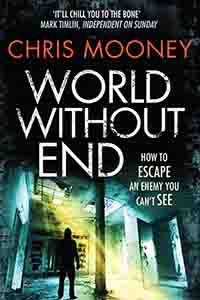 The black opps guy, Stephen Conway is set the task with the thought at the back of his mind that the enemy is a man called Angel Eyes. The task of protection the suite and designer is made more and more difficult because of a leak within his group, so finding and plugging the leak becomes a serious part of the overall task. This happens when the suit designer is kidnapped and the suite is stolen. A number of innocent people die, while three complete black opps teams are killed at the same time in various places, all part of Conway’s plan.

One person survives though, and becomes clear that there is a third party who is interested in the suite, this time a brutal Russian mafia gang. But which group is which and where do the lines smear and merge? And that is another twist in the tale.

Seeing as this is another new writer for me, I obviously don’t know much about him, but I wonder if he had a bad time from his father when he was child; he certainly made a point of giving most of his characters really bad fathers. One sits back and watches while his daughter is raped but a brut of man, not one but twice. He also does nothing when the girls ear is burned off by the man after one of the rapes. This train of bad-ass dads continues with so many the main players, including Angel Eyes himself.

I enjoyed this one and will look out for his six other stories whenever I am out and about. It’s written in an easy style that I like, rather than the heavy voice of some many other writers, so go on fellow readers, if you get the chance, grab it and have a read.