“If this debut is any indication, we are in for a long run of entertaining and thoughtful books. Dark, creepy and fascinating Devoured is a book that lingers long after the reading is done.”

The plot of this story takes place in 1856, in mid-Victorian England, in London. It chronicles the attempts by pathologist Prof; Hatton and his assistant Mr Roumande to help Scotland Yard find the killer of a Lady Bessingham and in doing so extend the use of forensics in criminal cases.

The Lady is the first of a number bodies that are to found in and around London and a fourth found in Wicken Fen. They are all found in different circumstances and yet they all seem to point to just one killer. Another case has been ongoing for some time, that of a lot of young girls being pulled out of the Thames. Interspersed with the story line, there’s a number of letter written from a young man, a specimen collector, working in Borneo at the same time. 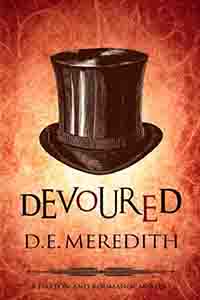 While reading this story it helps to remember that Mid-Victorian Britain was undergoing a huge change in attitudes towards the sciences and of course, to religion. Geology was just beginning its in popularity, and along with travel to far flung places where animals and plants were found that were immensely different to anything found here in Britain. That is where the rage for collecting specimens came into its own. The four deaths in the story, were all called ‘botanicals’, because their stand along the lines of growing science.

And so the story is set in a world of wealth and poverty, as described by Charles Dickens in his many novels. Wealthy people lived and walked in within their own small circle and ignored the grinding poverty all around. Disease with the lower classes was rife, along with alcohol abuse and brutality. Children died in the streets of London because of starvation and illness. Starvation could have been helped, while in some case illness could have been helped too, because that self-same science that the ‘divine order’ to which the wealthy saw as their right.

That ‘divine order’ is at the heart of this story, which asks questions of both sides of the argument without coming to any clear answers. Three years later Darwin released his Origins of Life which added to the controversy and increased the hypocrisy of the upper classes and their ‘divine order’.

The twist at the end of this story is worth the wait. Even so, this is one of those books I tried reading and gave up on because I felt I was getting lost along the way. However, having given it a second go I found it immensely enjoyable, as well as being an easy read. This one is worth the effort of searching for.