“New Scientist ‘Cunningham’s art …has clean lines and a continuity that is often graceful, charming and endearing.”

This is another in the line of Darryl Cunningham’s factually based comic books – his last Psychiatric Tales took the subject of mental illness and showed it in a way that would help people to understand depression and schizophrenia and deal with them. Science Tales attempts to do the same thing, this time to science. However, there is a little problem with the grouping.

Cunningham’s collection deviates from the normally accepted list of scientific hoaxes and branches out to include electro convulsive therapy, which was used to treat mental illness. ECT is a grim beginning, is more emotional than factual and seems to have strayed from Cunningham’s previous book. The subjects which follow are clearer from the factual viewpoint regarding issues like homeopathy and the moon landing, not to mention evolution. 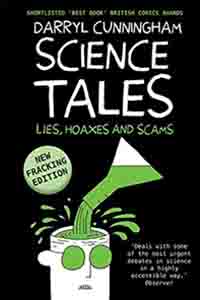 The comic treatment allows Cunningham the freedom to squeeze a lot of information simply into a few panels so that even those with a sketchy understanding of the concepts would make sense of them. There is a humorous touch to his bubbles to ensure that the whole thing doesn’t get boring. He is at his strongest when outlining history – however a lot of the subjects chosen, especially the ones on conspiracy theories sound like they have an underlying moral agenda. Homeopathy fans will not be happy to have the fact that homeopathy cannot cure cancer rubbed in through a grim anecdote of a believer in alternative therapy who died of cancer while under homeopathy. Debunking chiropractors too, seems to be a little off where this book is concerned.

Cunningham draws interesting parallels between HIV denial in South Africa and the dangers of politicians governing scientific policy – as in the case of the climate change issue which is topical. In a world where everyone is on the run, the graphic novel form stands a better chance of being glanced through than many word heavy tomes on the same subject.

However, Science Tales is not for those who already know these controversies – t has nothing new to deliver. At one level it works for young people who might want to know what the fuss is about and it does highlight the fact that science is not for politicians to tinker with. Indian readers may object to the debunking of homeopathy and chiropractors – the bone setter has been part of rural Indian life for decades after all.