“How much can a child of that age endure? But he does, and oh so how!
His grit and determination to live through this ordeal was gut-wrenching.”

A Child Called “It” tells the heart-breaking true story of the abuse Dave Pelzer suffered at the hands of his alcoholic mother, who perhaps had an undiagnosed psychiatric problem as well.

This memoir is told through the eyes of Dave, as he recollects it, between the ages of 4-12. As a result, the language and literary work is not great – but it portrays a realistic picture. 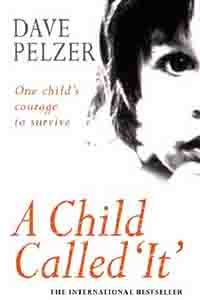 His mother, Catherine Roerva, abuses Dave in increasingly inventive and horrifying ways, such as locking him in the bathroom with a bucket of noxious chemicals, burning his hands over a stove, smashing his face against a mirror, letting him go without food for days, and making him eat dog-shit,baby-shit and even his own vomit.

After a while, I became numb.
How much can a child of that age endure? But he does, and oh so how!
His grit and determination to live through this ordeal was gut-wrenching.
Eventually, he survived and could break free simply because a few kind adults could not see his pain anymore.

There are quite a few controversies associated with this book – as to whether his story was an exaggeration. And there are reports to support and refute the same.

It is possible – that the state of constant torture and food – deprivation can conjure up vivid things in a child’s imagination. To what extent, if at all, things were fabricated we won’t ever know.

But there must be some element of truth in it – because his brother, Richard Plezer, also published his story, corroborating Dave’s claims.

The fact remains – Dave Pelzer was abused. He escaped and made a life for himself.

And no child, should ever go through 1/10th of what he did.