“Like the vinyl that crackles off every page, The Last Days of Disco is as warm and authentic as Roddy Doyle at his very best.”

This is a story about working class life in the early 80s, set in the South-West of Scotland. Bobby Cassidy and his friend Joey are fresh out of school with heads full of magic. They set up ‘Heatwave’ a mobile disco.

Unfortunately they find themselves in competition with local gangster the magnificent ‘Fat Franny’. Their adventures are hilarious, but life is not straightforward for most of the characters as it wasn’t for most people at that time. With Thatcher constantly buzzing in the background, like an unwanted wasp, for one reason or another: unemployment, the Falklands; it takes you right back to that era with an authenticity that is rare to find. 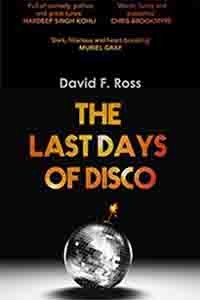 There is a mad cast of characters starting with the wonderful Cassidy family; Bobby taking centre stage, lives with his mum, dad and sister. Harry(I loved him) and Ethel’s marriage is in disarray but they plod on, sister Hettie is about to sit her exams. Brother Gary has gone south to join the army just as the spectre of the Falklands rears its ugly head. Gary’s story is bathed in pathos.

Then there is the aforementioned ‘Fat Franny’ a superb creation, Hairy Doug, Hamish May, amongst many others. Even the minor characters have a lot to give to this story and I can’t think of one who wouldn’t be able to hold a book of their own: that’s how well-drawn they are.

The descriptions of people are delivered in detail and are frequently hilarious. Jimmy Stevenson, van driver – “…He appeared to be in some degree of proportion from the rear, but from the side and front he looked pregnant. A mass of belly cantilevered precariously over the belt of his flared Farah slacks. The flares themselves partially concealed brown shoes that resembled the meat pasties sold in greggs bakery….His most defining characteristic was his hair – part Charlton sweepover, part Oliver Cromwell bell-shaped bob…” I defy you to be able to picture that man and not laugh.

This book took me right back to my youth, the music that runs like a golden thread through the story is perfect and I was downloading as I read. The dialogue is local and takes a short while to get used to, but once you are you don’t want it to stop: I found myself thinking in the Kilmarnock vernacular.

This is such an emotional read, one minute you’re crying tears of laughter and the next tears of sorrow. If you want to know what working class life was like in early 80s Britain, forget academic books: read this.

I really didn’t want this book to finish and the only thing that has consoled me is spotting in the acknowledgements that Joey Miller will be back! Can’t wait.
*****