“With a poetic intensity in its prose, an unpredictable plot and a Scottish detective, Mark’s novel gripped me from its opening pages.”

The only reason I knew about the existence of a place called ‘Hull City’ was because of a football club by the same name which makes short lived appearances in the Premier League occasionally. The book provides an eye opening ride through a city which sadly, like the football club is in absolute pits!

Fortunately, the book doesn’t fall in the same category. In fact, it is a top drawer crime thriller which has all the ingredients of a blockbuster. What’s more, it is also a debut novel(written in 2012) by David Mark who captivated me not just with the plot, but with his unique accent. Yes, I’m using the word ‘accent’ because it always felt like the characters were talking in a unique way, and I could read and hear it in that manner without any conscious effort(once again can thank years of watching ENGLISH PREMIER LEAGUE for that). 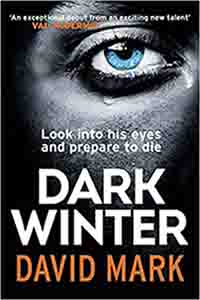 Now, that is what I call great writing! I will definitely try his other novels, and if his debut work is any indication, he belongs right up there with the likes of my favourite crime writers like Jo Nesbo, Ian Rankin. And yeah, the gentle giant of a protagonist- DS Aector McAvoy is as interesting and likeable as Harry Hole. Though I wish, he would fight better with that physique.