“This really is the “everything you have always wanted to know about feminism but were afraid to ask’ manual. From a mind as lucid and witty as it is kind and empathetic comes essential reading for the planet.”

The podcast has a collection of different guests from comedians and writers to activists and politicians, and covers a different topic each week. The Guilty Feminist has been a massive hit, and had 50 million downloads in two years. Its success, Deborah suggests is in part, due to the live audience who let women and other oppressed people know they have a tribe who understand and support them. 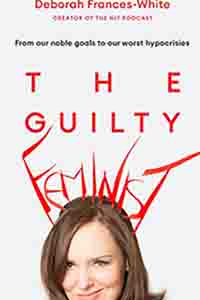 As a big fan of the podcast and Deborah Frances-White, I was excited when I heard (on the podcast) that she was writing a book. I was even more excited when I found out she was going to be touring the book and visiting Birmingham. I attended the event and received the book as part of the ticket price. I left this great event looking forward to reading the book, and I was not disappointed by what I read.

As regular listeners will know, each episode of the podcast starts with a game called “I’m a Feminist but…” where Deborah and her co-host confess some more guilty than feminist things from their lives. Each chapter of the book does the same – each one relating in some way to the chapter topic itself.

The Guilty Feminist book, like the podcast, aims to make feminism inclusive and accessible. The book starts by explaining the meaning and history of Patriarchy and Feminism. This quick history lesson covers the different waves of feminism and how the movement has changed over time – from the suffragettes chaining themselves to railings to get us the vote to social media campaigning such as the #MeToo and #TimesUp movements. While Frances-White has clearly done some serious research for this book – her information is laid out in a way that is easy to digest and understand.

She also explains the term “Guilty Feminism” to those who may not be familiar with the podcast. She explains that it is where our “noble goals” conflict with “the hypocrisies and insecurities which undermine them.” The idea of “Guilty Feminism” opens the movement up to a lot of women, who may have previously thought they weren’t good enough feminists. Deborah states, “We don’t have to be perfect to dare ourselves to be better.”

The book also explores some of Frances-White’s favourite “Guilty Feminists” from history, many of which are feminist figures that are less well-known, thus shedding a light on some great women from history that readers might not yet be aware of.

As well as feminists from history, Deborah interviews other feminists on issues and themes close to them, many of these interviewees you may already know from the podcast. They include; Jessamyn Stanley, Zoë Coombs Marr, Susan Wokoma, Bisha K.Ali, Reubs Walsh, Becca Bunce, Amika George, Mo Mansfield and Leyla Hussein. Plus, a piece written by Hannah Gadsby long before her hit Netflix special, Nanette. The interviews bring an even stronger element of inclusivity to the book with a diverse group of feminists talking about a range of different themes.

Particularly memorable of these interviews for me were those where Deborah and the interviewees discussed activism. These campaigns and causes give readers an idea of where to start with a cause important to them, or which causes they can get behind and support. “If not us, who? If not now, when?” Frances-White asks the reader.

Fans of the podcast will also be happy to see printed versions of some of their favourite speeches made by Frances-White – which she says she has numerous requests for. These speeches include some very emotive ones written in reaction to some big news stories including Brexit and Harvey Weinstein. Many readers will also be pleased to see a printed version of the Feminist re-write of the call-to-arms speech from Shakespeare’s Henry V. If you’re feeling lacking in confidence read this speech to yourself, it’s almost guaranteed to inspire some fire within you.

This book tackles some of the important issues that feminists face including confidence, intersexuality, inclusivity, and consent. It speaks to the stereotype of feminists being men haters, instead explaining that our enemy is the Patriarchy – which hinders everyone is some way by constricting us into two binary gender groups. “If we don’t respect the binary and form ourselves into two orderly camps, how will they know who to oppress?”

The Guilty Feminist by Deborah Frances-White is a brilliant piece of work. Witty, clever, thought-provoking, political, and inspiring. It opens feminism up to a whole group of people, who may have previously thought feminism wasn’t for them. And, hopefully, it will inspire a new generation of feminists to fight for what they believe in and continue striving towards equality. As Frances-White explains, “We are the breathing, living manifestations of the hopes of women who are not breathing any more. We must hope for ourselves, our daughters, and the women a hundred years from now.”