Demi Moore - Inside Out

“A candid personal narrative, in which Moore fills in not only the details surrounding the most visible parts of her history … but the portions of her life that she once fought to protect…. It is surprising to see such self-revelation from any prominent Hollywood actress—let alone one with Moore’s particular accomplishments and setbacks.

This is a very revealing memoir by a woman that survived the early years of not a very stable childhood, years of addiction finding herself only to get lost again and finally and hopefully moving once again in the right direction.

I first saw Demi in “St. Elmo’s Fire” and her character in the movie was not far from the real Demi at the time…with the help of a director who had faith in her acting abilities instead of taking advantage, cared enough to make the condition of the role in the film of going to rehab. 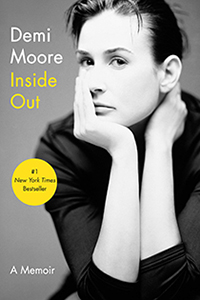 For Demi, this work, opening up about the highs and lows in her life, had to be cathartic and perhaps the best is yet to come. In my point of view, being in the entertainment industry has to be one of the most difficult lives to lead and after reading this work my view has not changed. I’m also not a fan of gossip magazines but I do enjoy a really good biography, auto-biography or memoir and this work is high on my list of being really enjoyable and well done.