Dervla Murphy - On A Shoestring To Coorg

An Experience Of Southern India

“On a Shoestring to Coorg is written in memoir style, straight from the shoulder with no punches pulled where likes and dislikes are concerned.”

This book is a classic of its kind, a memoir about the thing people most dread, a single woman travelling with a five year old. However, Dervla Murphy’s life has been full of path breaking travel – bicycling from Ireland to India and journeying mule back in Ethiopia, perhaps in an attempt to follow in RL Stephenson’s footsteps.

For a most travellers, Coorg may seem a more daunting adventure with the issues of child and pennilessness thrown in. Murphy only has what she carries on her back and she has bad memories of her previous Indian experiences – even though she does put that down to a lack of sensiblity on her own part. However, she attempts to revise her impressions through this trip, which is why she returns in 1973 with her daughter Rachel. Though one might think that the handicaps are even greater this time around, Rachel proves to be an unexpected boon in helping her mother connect with the locals and Murphy is quite happy to leave her playing in the jungle near their Thekkady hotel or let her go wandering with newfound Indian friends. 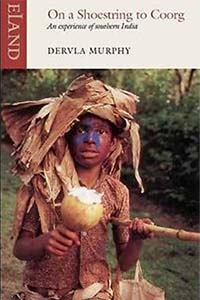 Leaving Bombay behind her – with a striking – though to an Indian obvious – description of the city’s poverty, she moves down the Malabar coast and then heads inland. Through this exploration she comes upon the lush secluded region of Coorg which seems more prosperous than the city she has left behind. There she finds that the people of Coorg are Anglicised, which is welcome, and hospitable but very conscious that association with foreigners may pollute them which leads to some explanation of Hindu principles and matters of caste.

On a Shoestring to Coorg is written in memoir style, straight from the shoulder with no punches pulled where likes and dislikes are concerned, punctuated by Rachel’s cuteness and the beauty of the scenery.

Murphy travels in the way one expects backpackers to do, on crammed buses, staying in fisherman’s huts and hotels with no stars, with no wish to hurry, just taking things as they come.