The Body, Food and Obesity

“Most readers may find the strings of terms difficult to network with but concentration may lead to a rethinking of one’s daily diet.”

Obesity is becoming more and more frequent in India. XL is the new normal  in shops and finding smaller sizes has become almost impossible in certain places. What is worse is that obesity results in a kind of lethargy that makes people wonder if they are ill. This is where FAT begins, from the inside.

Its authors, two doctors take a look at how the body reacts to adipose tissue rather than take a look at fat from the outside. They compare it to velvet – since the literal meaning of the two words is textile created from oil – which in proportion is beautiful but in excess loses its utility.  The authors quote figures from 2016 which enumerate 9.8 million obese men and 20 million women, leading in turn to greater health complications like hypertension, diabetes and osteoporosis. 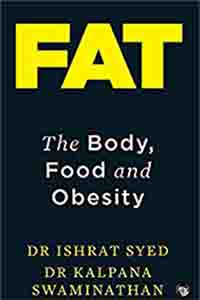 They talk about body mass index and how the figures differ for the West and for India. They also talk about how stress releases a hormone called corticotrophin releasing factor that results in a craving for energy – namely fatty foods which when burnt provide energy. Their theory is that it blunts the pleasure principle through anhedonia leading to overeating.

In between are thrown interesting snippets like a haughty cat that turned into a kitten when it heard the pappadum tin opening or why Shalini puts on weight though she claims to have eaten nothing every day. Yes most readers may find the strings of terms difficult to network with but concentration may lead to a rethinking of one’s daily diet.