“CRIMSON DAWN is the exciting conclusion to the Exilon 5 Trilogy.”

Bill and Laura find themselves right in the middle of the two almost at war parties, the Indegenes and the World Government. The human government wants to rid Exilon 5 of the Indegenes so that they can fully populate the planet without having to share it or its resources. Meanwhile a leading figure in the World Government has his own agenda and attempts to move the agenda along for his own purposes, removing anyone that gets in his way.

Stephen becomes enthralled with a new member of his society, she appeared the same time Anton returned from Earth. She appears to be Indegene but are her intentions as good as they first appear? Stephen cannot help himself falling for her, as do most of the male Indegene population that meets her!

Anton suffers further ill effects from his time being tortured and tested with a new evil character appearing to take over his mind, body and actions. 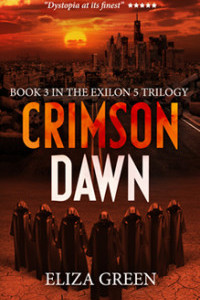 Back on Earth, Bill and Laura become emotionally involved but Laura is suffering from a virus she seems to have contracted whilst on Exilon 5. She appears to be metamorphosing into an Indegene but her body is fighting back and slowly her vital organs are shutting down. Bill asks an unexpected group for help to save his new love.

Finally, on Exilon 5 the two factions meet and attempt to discuss their differences and grievances but it looks like all out war is the next step.

Do our heroes win the day? You will have to read it for yourself.

This book returns back to the fine editing and storytelling of the first book. It is a shame that Altered Reality is slightly below par on this score but the whole trilogy is an excellent escape with Ms Greens plot moving along at a very good and enjoyable pace. I will certainly be looking out for more from Eliza Green.