“The Diggers were devoted to genuine egalitarianism … this is their story as much as Grogan’s and is one of the most fascinating books ever written about sixties counterculture.”

I’ve been fascinated with the music of the 1960s since I chanced upon my parents’ Beatles records as a kid. With that came an interest in the counterculture. And I’m very much in sympathy with the ideals of The Diggers, a group of radical street activists from San Francisco’s Haight Asbury. And yet I was almost relieved to finish Ringolevio, the memoir/autobiography of leading (but definitely not the leader) Digger Emmet Grogan.

Ringolevio opens with a fascinating, vibrant account (perhaps the best thing in the book) of the game which gives Grogan his title, a violent New York street affair somewhere between Rollerball and the British childhood game Down 1,2,3. 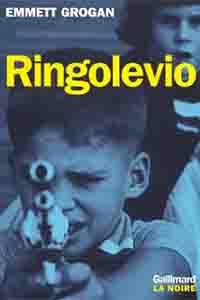 Our hero – who writes of himself in the third person – is called Kenny Wisdom in his blue collar Brooklyn childhood (though Wikipedia tells me he was born Eugene Grogan).

It’s a tough environment and young Kenny is soon a junkie on the verge of wasting his life in the US prison system when a Jesuit priest talent spots him and wangles him an entrance exam to a posh Park Avenue private school.

Kenny fascinates his new school mates, whose families he sets about robbing. When a local mafia figure gets jealous at his unsanctioned successes he jumps on a ship for Europe.

The Netherlands, Germany, Italy, England, Ireland, France… Kenny tours the continent, stealing, exploring, learning, returning to the US to take revenge on a troublesome criminal acquaintance, and taking on the name Emmett Grogan in Ireland in tribute to a freedom fighter.

He returns to the States to find the sixties just getting into their swing, taking LSD for the first time and starting to enjoy the Beat poets before he’s drafted into the army. Deciding Uncle Sam’s not for him he fakes his way out of the forces and winds up in San Francisco, just as the city is about to become the epicentre of a huge counter culture.

The Diggers were born from radical theatre and mime, and street performance and happenings remained part of their programme (Peter Coyote, a leading member (but not a leader) went on to have a pretty successful Hollywood career).

They took their name from a group of English Civil War activists who occupied common land and attempted to farm it, promising a utopian future of small, rural communities. They didn’t last long.

Neither did the San Francisco Diggers who were, according to Grogan, after “freedom and a chance to do your thing, but they felt one could only be free by drawing the line and living outside the profit, private property, and power premises of Western culture because, as Coyote remarked, “The idea of changing anything from within has been exploded long ago.””
The chief plank of their programme (along with regular happenings and free concerts) was a Free Food programme feeding the throngs of teenagers who arrived in San Francisco looking for a groovy alternative to the American Dream.

It’s the Diggers’ determination to actually do something useful and practical that makes them stand out.

But Grogan’s adventures in the counterculture are a dispiriting affair, surrounded – in his eyes – by fakes, phonies and self-serving pseuds. Perhaps this is how it was, but it soon wears you down. Grogan’s trip into the wild to explore Native American ways is an uplifting contrast to the almost constant inter-hippy bickering of the last section of the book.
There may be one key phrase in Ringolevio: “This conclusion of his brothers was legitimate in terms of Emmett’s powerful monster ego.”
And that might be the problem in his autobiography. Emmett turns to crime – he’s immediately one of New York’s top burglars. Emmett goes to London – he’s soon a major figure in the underworld. Emmett goes to Rome – he’s soon a neighbourhood fixture and is accepted into one of the country’s top film schools. No sooner is he in Dublin, than he’s on active service with an IRA unit…

And when we come to San Francisco and the counterculture the same is true. Almost no-one is good enough for Emmett. Abbie Hoffman gets a particularly thorough kicking, but really only the Black Panthers and Hells Angels get a few good words thrown their way.

Sometimes the whole book feels like a giant score settling. It’s also very long, with no chapter breaks. I found it tough going, though it’s by no means badly written, there’s just too much of it. Grogan certainly lived a rich and fascinating life: junkie, criminal, traveller, activist, actor, and I hope someone writes a biography of him some day, that would be fascinating.

It’s too late now – Emmett died, possibly of a heroin overdose (murder the introduction here darkly hints), in 1978 – but I wish this monster of a book had been cut into at least two. A life story, and a radicals’ how-to. And I wish someone had insisted that a lot of the petty squabbles had just been cut out.

This was the second time I’ve read Ringolevio and it didn’t have this powerfully negative effect on me the first time. Perhaps I’ve changed.
If you’re seriously interested in the 60s counterculture then you should definitely give Ringolevio a go. But you should be patient, and don’t expect any good vibrations.