Erik Larson - The Splendid and the Vile

“Every time Churchill took to the airwaves it was as if he were injecting adrenaline-soaked courage directly into the British people … Larson tells the story of how that feat was accomplished … Fresh, fast and deeply moving.”

Larsen’s latest book is about Winston Churchill’s first year as Prime Minister during WW2. It begins with Dunkirk and ends with the end of the first Battle of Britain and Rudolph Hess flying to England to try and end the war.
Winston Churchill lately has become a figure who has lost his glow because of his racist views. But no one, and I mean no one, did more to save the world against Nazi Germany than he did. Here are his greatest speeches, his unbelievable ability to rally people to his cause, to keep believing in God and Country under the most adverse circumstances, and while England stood alone against Germany, his unending quest to get FDR and America to help them survive. 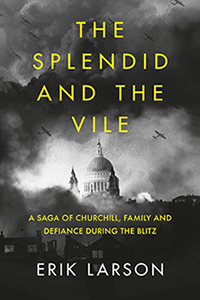 Many believed he was a showman when he would personally visit every area that was bombed. The people loved him for it. His ability to get the finest people to work with him in his government, constantly refusing their attempts to resign because he knew what a great job they were doing and England couldn’t afford to lose these people. The building of the aircrafts England needed to fight off the German air attacks against London is a prime example of how they increased production over and over again, allowing them to keep Germany from bombing England to its knees, and not forcing them to either capitulate or face invasion.

Larsen always writes a great narrative, making History jump off the pages, and he always includes many anecdotal incidents that really bring to life the personality of Churchill.
A very fine study of that first year, a must read by anyone interested in WW2. Highly recommended.

While the United States took a wait and see, it’s not our problem attitude, the bombs fell on Britain and its people. Most of us are aware of this fact. While Hitler was plowing through Europe, wrecking every type of havoc on its citizens, Britain might have appeared down, but she was never out. In this work, the author follows the war, its effect on the populous and the Churchill family while the bombs dropped.

Getting an overview using mostly facts and figures does not tell the whole story like the view from the ground. Larson is an excellent non fiction writer where he incorporates an event with a focus on the main participant or participants. I have never been disappointed with any of his works as they are well researched, easy to understand and an excellent read.