Flea - Acid for the Children:

The autobiography of Flea, the Red Hot Chili Peppers legend

“He writes in Beat Generation bursts and epiphanies… You’ll put down Acid for the Children with your human sympathies expanded; you’ll feel less alone.”

For almost 40 years, the American rock band Red Hot Chili Peppers have been creating music and bringing their funk-rock fusion to people around the world. Most bands struggle to remain relevant for more than a decade or so before splitting up or fading into obscurity, but the Chili Peppers have been around longer than some of their fans have been alive. It’s a testament to their skills as musicians, and their boundless energy, that they keep rocking the charts long after most of their peers have retired, kicked the bucket, or grown stale. While the band has had several drummers and guitarists over the years, vocalist Anthony Kiedis and bassist Michael Balzary, better known simply as Flea, have been with the band since its formation in 1983. After a lifetime of rocking the bass, Flea has published a memoir called Acid for the Children, and it’s a must-read for anyone who enjoys getting funky with the Chilis. 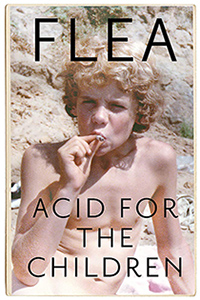 Some might feel sceptical about diving into another rock ‘n’ roll memoir, after all, we’ve seen plenty over the years from aging rockstars, and most seem to blur together in a mix of sex, drugs, and petty fights over royalties. When Flea first announced he would be publishing a memoir, he made it very clear that this was not aiming to publish yet another celebrity biography, but rather, wanted his book to stand up to serious scrutiny, and that it would have something to offer even those who have never heard of the Chili Peppers. “It’s my great hope that it could be a book that could live beyond being a celebrity book or a rock star book and just stand on its own as a piece of literature,” he said. We’ve heard that sort of thing before from plenty of celebrities plugging their books, but in this case, I’m relieved to report that Flea accomplishes exactly what he set out to do, and then some.

Before you dive in, you should know that, unlike Anthony Kiedis’ 2004 autobiography Scar Tissue, Acid for the Children is not about life in the Chili Peppers, it ends after the three founding members of the band play their first gig together, at which point they weren’t even called the Chilis. Acid for the Children is about Flea’s childhood, from his birth and early years in Melbourne, Australia, to his family’s relocation the other side of the world to New York, USA at the age of four. From here, Flea recounts his highly unconventional childhood, which includes tender moments between himself and his friends and family, to heartbreaking moments that make you want to reach through the pages, hug the young child and promise him it all works out.

I would like to point out that, rather than reading a physical copy of the book, I listened to Flea narrate the audiobook edition. I understand that audiobooks aren’t for everyone, indeed, I usually prefer the real thing, but in this case, I firmly believe that the audiobook is certainly the best way to take in Acid for the Children. The book begins with an introduction read by none other than Patti Smith, and Flea then takes over to tell his story with great enthusiasm, sometimes including music to underscore his words. It’s clear that our author has put in a great deal of effort to make the audiobook version just as legitimate as the physical copy, though in my opinion, it surpasses it, and I say that as someone who owns both versions. As well as being one of the finest bass players of his generation, Flea is an accomplished actor and has appeared in the likes of Back to Future Part II & II, The Big Lebowski, Baby Driver, Family Guy, The Simpsons, and Toy story 4. Using these talents, Flea pours his heart and soul into narrating the memoir, and anyone who detests monotone narrators will enjoy listening to Flea chuckling as he recalls fond memories of his youth and will feel their heartstrings tugged when his voice cracks recounting childhood traumas.

There’s no denying that Flea had an extremely wild childhood, and that’s putting it lightly. Following his parent’s divorce, his father returned to Australia, and Flea and his sister found themselves alone with their mother and her new, unpredictable boyfriend Walter. Their stepfather struggled with mental health issues and was often the cause for fear and anxiety in the two children, though his passion for music gave Flea an early insight into the wonders of playing instruments. Later in his childhood, Flea returned to Australia to live with his father, an upright and tough man who struggled to accept Flea’s wild ways. Upon returning to live in the States with his mother and Walter, who often hosted grand jam sessions at their house, Flea fell in love with jazz and became a talented trumpet player, idolising the likes of Miles Davies and Louis Armstrong. Despite the passion for music in his household, there were also frequent bouts of aggression and physical violence, usually fuelled by alcohol. Feeling increasingly alone and anxious, Flea, at the age of just 13, turned to cannabis to help cope with his issues.

Flea’s story is his to tell, so I’ll say no more than that, but no doubt many readers will feel a great deal of sympathy for the young bassist and wonder at how his parents could’ve paid so little attention to his wellbeing. While I wouldn’t be at all surprised if Flea regarded the parental figures in his life with contempt, I was surprised to find he recalls these tales with a zen-like sense of forgiveness and compassion. While he had to witness and endure things no child should, Flea acknowledges that his parents were troubled, young, and lost themselves, and it shows his maturity that he accepts his upbringing and his love and forgiveness to those who raised him. As mentioned earlier, Flea hopes his book will stand as a genuine piece of literature, and I believe his way of writing about the fear, loneliness, anger, and isolation he felt as a child is an excellent examination of the troubles many of us feel as we grow up and figure out our place in the world, particularly those of us who don’t have a solid foundation on which to stand on. If all of this sounds pretty grim, then I assure you there are plenty of moments of love and levity, and it’s clear Flea doesn’t recall his early years as being all doom and gloom.

The bibliophiles among you will be pleased to learn that our author is an avid reader as well as a keen musician. A huge fan of Vonnegut, Flea, and his sister grew up devouring books, a passion they both share to this day. Clearly, Flea has learned a thing or two from all the reading he’s done, as he proves himself to be almost as gifted with the pen/typewriter/word processor, as he is with the bass or trumpet. Flea’s writing style was as appealing to me as many of the classic authors I’ve read and I greatly enjoyed how deep his writing could be, whilst also being pithy, fun, and unpretentious. He revels in the English language, using long, interesting words, as well as the sort of cursing and gibberish you might hear from two drunks staggering out of a pub, but it’s all to great effect. Truly, I would like to read more from Mr. Balzary though, by his own admission, his sister is the great writer of the family.

As you can probably tell, I am a Chili Peppers fan, I’ve enjoyed their music for years and I can remember hearing their music on the radio or TV long before I even started properly paying attention to music. Since the early ’90s, if you tune in to a rock radio or TV station, you’d hear something from Flea and his pals sooner or later. That said, despite my appreciation for the band, I have to admit that I find some of the antics from their early career pretty hard to stomach these days. Fuelled by youth, testosterone, and a dump-truck full of drugs, these boys were seriously wild and, to be honest, not the kind of guys I’d want to be around. I’m certainly much more a fan of the Chili’s after they kicked their addictions and started mellowing out, rather than the guys they were in the early to mid-90s, and I’d always found it hard to reconcile how they went from being arrogant rockers to the chilled out Chilis we’ve known since 1999’s Californication. Having read of Flea’s rough childhood, it now all makes sense, and frankly, I’m surprised our author didn’t end up dead or in jail. As Flea himself acknowledges, he has more than a few guardian angels watching over him. In the closing chapters, Flea acknowledges the damage his wild way of life has done to both himself and those around him and comes to the conclusion that he benefited nothing from his years of substance abuse. Now, as a middle-aged man with a family, he asserts that the highs he gets now from his meditation, hikes through nature, and enthusiasm for the world far surpass the highs given by the drugs he pumped into his veins. I’m so glad Flea survived his early years, not just for the beautiful music he has created, but also for the wisdom he can pass on to younger readers, who may identify with the struggles he endured, and know there is a light at the end of the tunnel.

At the end of the memoir, Flea jokes that the reader/listener should keep an eye out for part 2, and I certainly hope we do eventually see some sort of follow up. I greatly enjoyed listening to Flea’s writing and I’d happily consume any piece of writing he produces, whether it be about his adventures as a musician, his musings on life, or anything he feels like writing about. If you’re a Chili Peppers fan then you should give this book a go, but I would also recommend it to anyone looking for a beautifully vulnerable examination of growing up, and the fun, freedom, angst, and loneliness that can entail.