“Fantasy and sci-fi fans finally have a book they can bond over. This is going to be a series to watch.”

The Fire Sermon by Francesca Haig is a dystopian novel set in the future where only twins are born, one of which is the perfect Alpha, the other born with some sort of abnormality making them the Omega.

Omega’s are branded and sent away and share nothing with their twin except that when one dies so does the other.

The action starts right away in this book, pulling you in on page one and beginning right in the heart of the story. As the plot develops we flash back to the past to fill the reader in on the background information and character development without drawing away from the action of the story, in a seamless and smooth read.

Due to its dystopian nature and themes of discrimination, segregation and Governmental control over Freedom of speech; I would describe this book as a cross between Malorie Blackman’s Noughts and Crosses, George Orwell’s 1984 and The Hunger Games by Suzanne Collins. 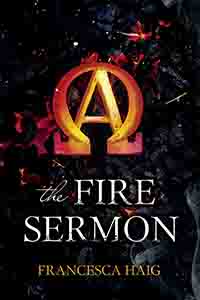 With strong characters, a brilliant concept and unexpected plot twists, this is a unique and interesting read that kept me hooked from start to finish. With a sequel on its way soon, I would strongly recommend this novel and am looking forward to the upcoming continuation of the story in ‘The Map of Bones’