“A triumph of the imagination, Dune is considered Herbert’s finest work”

Published in 1965, Frank Herbert’s Dune is to sci-fi what Tolkien’s The Lord of the Rings is to fantasy. The novel set the bar for the sci-fi genre and it’s hard to think of many other books that come close to the scope and ambition of Dune. I remember seeing a copy of Dune as a young boy and being fascinated by the front cover, which depicted an enormous sandworm bursting out from the desert.

I was intrigued to know more but, being so young, the hefty tome also seemed very intimidating. Thus Dune has been on my ‘To Read’ list for some time and for years friends who’ve read it have been urging me to pick it up. I decided it was high time to give the book a go and, somewhat fittingly, I read Dune over the course of the hot Summer. 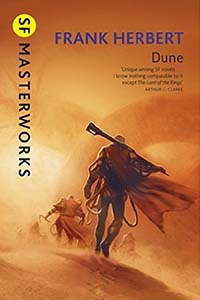 While I had heard a lot of people praise Dune, I really didn’t know very much about it going in. I was surprised to find that, whilst Dune is indeed a sci-fi book, there are certainly elements of fantasy to it. The galaxy is ruled by an Emperor and is served by noble houses which occupy different planets. Our story begins with House Atreides having to leave the beautiful planet it has ruled for generations in order to rule a new planet named Arrakis. Mostly made up of harsh deserts, Arrakis would be a desolate wasteland were it not for the abundance of an incredibly rare spice known as Melange which can bestow its user with extended life and heightened senses and abilities. However, once a person has tasted this spice, they must keep taking it or else withdrawal will kill them. In an effort to destroy House Atreides, the Emperor orders the House’s leader, Duke Leto to become the master of this strange new planet. From here we follow the Duke’s son, Paul, as he and his family arrive at the new world fight to survive against those who would see them destroyed.

Going into Dune, I was surprised by the presence of certain fantasy tropes. I’d assumed it would be all spaceships and laser pistols but I was underestimating Herbert’s talents. The galaxy that exists in Dune follows a feudal system where noble houses serve the Emperor. This may be the distant future, but human nature remains the same and all the lords and ladies are scheming in order to rise higher and see their rivals fall. In many ways, there are parts of Dune which reminded me a lot of the world of Game of Thrones. The world (or galaxy) of Dune is very much in keeping with our own history and adds a sense of grounded realism, despite the fantastic things that do happen.

The book’s primary character is Paul, the son of Duke Leto and his concubine, Jessica, a member of a mysterious and powerful group of women known as the Bene Gesserit, who’s intense training allows them seemingly superhuman abilities. Through Paul’s eyes we watch as his mother and father struggle to keep the House together in the face of political espionage, assassination attempts, and the alien and unforgiving nature of the planet itself. When tragedy ultimately does strike, Paul is forced to flee into the unknown and tap into his true potential if he’s ever to take back what was stolen from him.

Like all great works of fiction, Dune is a book that, despite being a grand sci-fi fantasy, still manages to hold a mirror up to our own world. Themes such as political scheming, social classes, duty, and man’s relationship with nature are all present in Dune and I often found myself reflecting on how points in Dune could very well be applicable to our own way of living. Frank Herbert was a wise man and spent years studying before he even began writing. His philosophies and ideas may be rooted in Dune, but are clearly designed to inspire and educate readers with lines such as “When politics and religion ride in the same cart, the whirlwind follows.”

Dune has many levels to it and it’s the sort of book you can read a number of times and find things you may have missed the first time around. Whilst Dune is certainly deep in its philosophies and ideas, it is backed up with an excellent story full of memorable characters and very well realised world. It’s the sort of book anyone from the age of 13 can enjoy, though each reader may appreciate it for different reasons.

Reading it as a child, you may enjoy it at face value for its tale about a young lord forced to go outside the law to redeem his House. A second reread years later will allow you to consider more the politics of Dune and the social classes. There are warnings about global warming, the benefit of societies working together, critiques of government, reliance on technology, the problem with prophecy, and religion. This is truly a book that’s too grand to take in during your first read.

I highly recommend Dune to anyone who enjoys deep works of sci-fi or fantasy fiction. Fans of The Lord of the Rings, Game of Thrones, and The Handmaiden’s Tale will feel right at home here. I look forward to re-reading the book in years to come and I expect there’s a wealth of content still waiting to be uncovered.

This sci-fi novel is set in a technologically advanced, huge interplanetary empire.  Crucial to the operation of said empire is a drug known as Melange or simply “Spice”.  This drug allows (amongst others) the navigators the Space Guild to see into the future and thus guide the spaceships on a safe route to their destination, keeping vital commerce and other routes open.

It also allows other individuals to tap into knowledge of the past.  The Spice is harvested with great difficulty and danger in only one place – Arrakis – a hostile desert planet more commonly known as “Dune”.

Dune is home to the native Fremen – a fiercely independent and semi-nomadic people who live in the deep desert.  Others living on Dune are a population of non-natives mainly associated with the spice mining operations, along with a few empire bureaucrats living in the small number of built settlements on the planet.

There are multiple noble houses participating in something akin to a medieval feudal system as they jockey for favoured positions in both commerce and influence with the Emperor.  In addition, several powerful interest groups use advanced genetic techniques, combined with intensive training programmes to give their members abilities that appear almost magical to the reader.

This all leads to a complex political landscape that makes the antics of the Borgias seem like a Sunday afternoon family picnic in comparison.

Into this political maelstrom enters Paul Atreides, a young man, and heir, of one noble house that is set to replace another on Dune with rights to mine the Spice, and all that entails in revenue and status for House Atreides.  If this all sounds too good to be true, it is…

There is a strong environmental message in the novel which you can take or leave.  Despite the complexity of the story and the various interests groups, this is a remarkably easy read and hugely enjoyable as you watch the various political machinations take place before you.  I could vividly ‘see’ the story taking place in my head as I read the authors clear and descriptive text, and it has since become a great favourite of mine.  The book can be read as the first in a (now very) long and frankly variable series or just as a truly excellent stand-alone novel.