“This wacky, charming novel. . . draws you in with humor, then turns out to contain both a suspenseful subplot and a sweet romance. . . Hilarious and moving.”

I have to confess that I do suffer from some kind of allergy concerning literary hypes of all sorts. I refuse reading most hyped books as long as I possibly can. This one was to be no exception. But then my „English Book Club“ chose it as its next month‘s read. So I gave in, and was quite pleasantly surprised.

This is no world literature, to be sure. And yet, it is more than just entertainment. It is something between family drama, love story, and coming-of-age.

Who is Eleanor Oliphant, then? The story is told from her perspective in the first person, so we come to know her quite well. Yet I find her elusive, enigmatic even. She is a fairly good example of an „unreliable narrator“. The reader has to do some work to extract truth from lie, memory from glossing over. 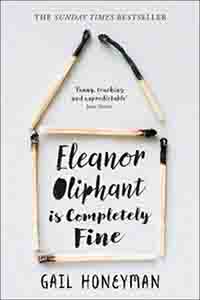 She is a young woman at the beginning of her thirties. She has been working in the same office for nearly ten years now. She is a social outsider par excellence. And we are supposed to believe that, since her youth and her upbringing in diverse foster homes, she has not retained a single contact or a single friend. And this is where I doubt the book‘s credibility very much!

She might be a little autistic, but this is never clearly diagnosed. She‘s had a really difficult childhood, but this is only partially revealed, step by step, memory by memory. Insofar the book is the story of Eleanor rediscovering her past.

I was fairly strongly reminded of „The curious incident of the dog in the night-time“, the famous book by Mark Haddon. Eleanor‘s very clumsiness and social ineptitude are showing us the faults in our own interactions, and the various ways in which relationships can be superficial or openly dysfunctional. Eleanor works like a magnifying lens.

Since I am no native speaker, there were numerous instances where an allusion at first escaped my notice, or where I entirely missed the humorous aspect. I could only guess why I was supposed to laugh when she asked for „Bobbi“ in a Bobbi Brown store…

A few aspects of the book frankly made no sense for me. Eleanor is not stupid – she has been studying classical literature! She‘s even had a boyfriend once. And yet, she is supposed to be completely unaware of the aspects of superficial infatuation with a rock-star…? Nooo way…!

Yet the book was truly charming most of the time! Eleanor is becoming friends with an office colleague, Raymond. Together with Raymond, she rescues an old man in the street – and in turn, is getting to know his family. She is finally learning what it means to have friends,to be living a social life. I was often alternating between sobs and laughter…

There was a twist near the ending of the book that I find debatable. It is about a dubious connection to her past that she has retained during all these years. I really don‘t know if it would or could happen this way…

Anyway, the ending is optimistic, but open. The author has avoided some obvious pitfalls here. Eleanor has not become everybody‘s darling overnight. And she and Raymond have not become lovers. Yet… I suppose a sequel is a distinct possibility. I would certainly read it.”

Eleanor Oliphant is Completely Fine is Gail Honeyman’s debut novel and won the COSTA First Novel Award in 2007. Reese Witherspoon has bought the film rights for this book and it has also been a No.1 Sunday Times Bestseller. Despite all this, I would say, Eleanor Oliphant is just about fine.

Eleanor lives in Scotland, in a community flat, works as an accountant in a design company, drinks two bottles of vodka every weekend, hasn’t taken a single day of leave from work in nine years, speaks to her mother on Wednesdays and has a dreary sense of fashion (or the complete lack thereof). She obviously is a social recluse and pines for company. Eleanor all so deeply reminiscent of the typical troubled character, made ever so famous by Bridget Jones. But unlike Ms Jones, Eleanor Oliphant fails to leave an endearing mark on your psyche.

Eleanor Oliphant is not without the sense of witticism either. There are situations and conversations that will make you smile, at times even laugh. For instance the time when Eleanor chooses to dress up to impress her ‘rockstar’ prince charming and is seen asking for Bobbi at the Bobbi Brown store. Her self evaluation of her made-up self wasn’t totally unworthy of the laughs either.

She passed me a hand mirror. I didn’t really recognize myself. The scar was barely noticeable, and my eyes were heavily rimmed and ringed with charcoal, reminding me of a programme I’d watched recently about lemurs. My lips were painted the color of Earl Haig poppies.

“I look like a small Madagascan primate, or perhaps a North American raccoon,” I said. “Its charming”.

And then there are those times, when you almost feel sorry for the 30 year old, Jane Austen reading accountant. While having a cringe-worthy life in itself is crappy enough, being called a ‘waste of human tissue’ by your own mother does set your grief apart the rest. There however, is no point in the narration, where you can actually really feel the characters or see them just as if they are in front of you. And that for me is what takes away a few brownie points from this Sunday Times Bestseller.

The book doesn’t qualify as a bad read though. It is a steady non-pretentious book, justifying your time over a couple of weekends. The language is conversational and easy. The characters though quite stereotypical in themselves are likable none the less. There are no twists in the tale (well almost), the characters are as predictable as any could be. Reading this book is like sitting on a beach on a summer afternoon and watching the waves thrashing the shore. There is a definite rhythm to it, like a monotone, but not something that you want to break. In all fairness, Eleanor Oliphant whilst not completely fine, is fine enough for that one time read.