“All animals are equal – but some are more equal than others.”

On paper, George Orwell’s Animal Farm sounds like it could be a simple children’s story. After all, it tells the story of a group of talking animals who usurp the cruel farmer who owns them as they endeavour to create a utopia for animals where all are equal. However, dig a little deeper and you will soon see that Animal Farm is an allegorical novel that shows how revolution and socialism can often pave the way towards dictatorship and oppression.

The book was written by Orwell as a commentary on the Russian Revolution and the Stalinist-era of the Soviet Union. The book is a warning of how easily revolution can lead to a leadership even worse than the one that preceded it and shows how today’s liberator can become tomorrows tyrant. 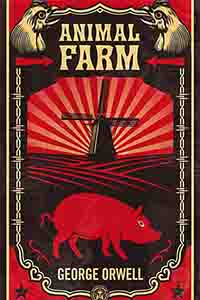 The characters may be animals, but the message of this book is one that all humans should take to heart. Many of the characters are meant to represent real historic figures and, what appears to be a simple novel about a group of animals, may well be one of the most important books ever published.

The book begins when an old boar named Old Major (representing Karl Marx) tells the other animals about his vision of a future where humans (who represent the Tsar rule) no longer rule over animals and where animals live and work together for the betterment of all. The animals soon plan a revolution and drive their human masters out of the farm. Soon afterwards, two pigs named Napoleon and Snowball, designed to represent Stalin and Trotsky respectively, assume the mantle of leader. The two begin to butt heads on a number of issues regarding the farm. Eventually Snowball is exiled from the farm by Napoleon and Napoleon is able to take control unchallenged. Another pig named Squealer (who represents propaganda) begins sowing lies about Snowball to the other animals who are made to work whilst the pigs live in comfort. The pigs begin trading with humans and, as the years pass, the laws of animal farm become warped so they favour the pigs more. One rule that originally read “All animals are equal” eventually reads “All animals are equal but some animals are more equal than others”. The pigs become so like their former human masters that they begin to betray their own kind and even start walking on two legs. By the end of the novel, the downtrodden animals look at the pigs and the men and can’t tell which is which.

The average reader could be forgiven for not have a particularly strong grasp on the Russian Revolution or the Soviet era that followed, but that’s why Animal Farm is so important. It serves as a critique of complicated ideas and philosophies but presents it in a format that can be understood by everyone.

Whilst the book may specifically be about communist Russia, readers from around the world should take the book’s message to heart as the ideas and plans of the animals are present in all humans, nit just those from a specific part of the world. Remember that, by definition, a revolution is destined to end where it begins. So remember, if you’re planning to topple the system, see to it that you don’t become the thing you were fighting in the first placer.

It took me far too long to get around to reading Animal Farm and I only wish I’d read it sooner. This is a book everyone should check out and I certainly intend to go back to it throughout my life as both myself and the world around me changes. Stay true, comrades!

Animal Farm is an allegorical novella referring to the Russian Evolution in 1917.Our story focuses on a team of animals who overthrow their master Mr. Jones and aspire to be freed from the human thrall. Through his simplistic but subtly ironic writing, Orwell explores the hardships of the working class at such a period and delves deeply into the minds of these downtrodden animals.

In my opinion, it is easily one of the most memorable books I have ever read since it achieved what school could not: getting me interested in history and politics.

The simplicity of such story makes it approachable to everybody and I think this is the reason why it is such a well know piece of literature.

To be honest, despite the fact that this is a novella it took me a long time to finish it because I wanted to take it all in without leaving out a single important detail. Another thing I would like to point out is the cleverness of the writing style. It is told in a third person narrative but the narrator sometimes seems to be leaning towards the idea that Napoleon is a fair leader which in a way tricks even the reader into thinking not everything is as bad as it looks. Maybe I am looking too much into it but that is the way I felt.

“Not when Squealer described the scene so graphically, it seemed to the animals that they did  remember it.”

A huge portion of this book also deals with the effect of  the propaganda on the common people. The animals are lured into whatever they are told by their superiors which stresses the importance of knowledge since most animals in the farm are illiterate into becoming an active and responsible member of society.

“As Clover looked down, her eyes filled with tears. These scenes of terror and slaughter were not what they had looked forward to on that night when Old Major first stirred them to rebellion. If she herself had had any picture of the future, it had been of a society set free from hunger and the whip, all equal, each working according to his capacity, the strong protecting the weak. she would accept the leadership of Napoleon. Such were her thoughts but she lacked the words to express them.”