“With her blistering debut Sharp Objects, Gillian Flynn hit the ground running. Dark Places demonstrates that was no fluke.”

Libby Day lived through her family being massacred when she was seven years old. her brother, Ben, is now serving a life sentence for the murders, thanks in part to the evidence that Libby gave.

Since then Libby has been sleep-walking through life, no job, no friends; existing on a fund set up by well-wishers. But now that the fund is running out and the book that Libby helped to write was not a much of a success, she has to find some other way to make some money. So when she gets an invite to be a guest speaker at the Kill Club, a group of true-crime devotees, she reluctantly takes them up on it. What she doesn’t know is that the Kill Club members believe fervently that Ben is innocent. So Libby sets off on a search for the truth of that horrendous night. 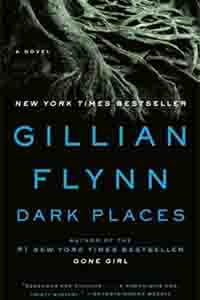 Interwoven in Libby’s story are the events leading up to the murders on 2nd january 1985, told alternately through Patty, Libby’s mother and Ben. The backstory is tense and chilling, filled with the most awful characters imaginable. Ben, at the heart of the story, is a loner and a troubled, easily-led individual caught up with some extremely nasty people. He gets involved in drug taking and satanic worship with a girlfriend who knows no boundaries.

Patty is probably the only character in the book who elicits any real sympathy. She struggles with no money to keep the family farm going, and her children fed. Trying at the same time to keep her revolting ex-husband at arms length.

Libby, who survived the murders by hiding in a cupboard, is a very well-drawn character, in that her whole life has been badly affected by what happened and rather than show us some unrealistically sympathetic character, the author shows us her dark side. She doesn’t work, she is lazy, prone to violence and thieving. She is very hard to like, although as the book progresses I did find myself warming to her.

Never has a book deserved its title more than this one. It is dark, dark, dark. The countdown to the murders makes for very unpleasant reading. I thought this book was a good portrayal of class and values, the effects of money or lack of it, and the boundaries that people, especially teenagers, need.

I would recommend this book if you like reading about dark subjects. if you’re expecting another Gone Girl you will need to think again. I wouldn’t have even said it was the same author. Which says something for the talent of Gillian Flynn.