“Nesser spends as much time with his characters as with the mystery, and the police officers soon become familiar, creating an absorbing tale with an unexpected ending.”

In its presentation one can see the influence of the Martin Beck procedurals by Maj Sjöwall and Per Wahlöö, the prose as clear as Nordic air, the clues as slippery as melting ice. Not that Nesser doesn’t have his moments of song. As sibilant and ethereal as a Sibelius passage, our author will wax poetic:

“What we can be sure of , what we can rely on absolutely, is evil. It never lets us down. Good… goodness is only a stage set, a backdrop against which the satanic performs. Nothing else …..nothing.” 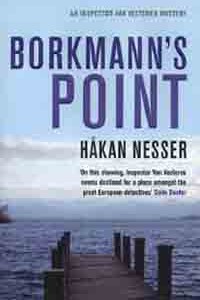 But these are a sparse as the mountain treeline, something Nicci French could do well to learn: great prose can be appreciated most when it stands out against the backdrop of the mundane.
Let others tell you about the three axe murders, the reticent Inspector Van Veeteren, the retiring (actually) Inspector Bausen and Mr Nesser’s literary credentials.

What interests me is when the book suddenly turns into a Samuel Beckett play. It involves the lovely young officer Beate Moerk when she is kept underground in the dark by the murderer…I’m not giving anything away here for chrissake, it’s on the back cover, “and one of Van Veeteren’s colleague’s, a young female detective disappears without a trace…”
In the dark then, a litany from the killer’s lips of lost time. A faint cigarette glow in the dark and a voice devoid of hope, bereft of future, only a briefest point of happiness in the past:
“…perhaps there was a faint glimmer of hope left, a possibility…That’s what we told ourselves. The desperate illusion of vain hope. We believe what we have to believe…That’s what this damned life looks like. We cling on to whatever is at hand.Anything at all…”
Until there is nothing left to cling to but a snapshot memory. Of a time when there seemed to be hope and promise.
“He fell silent. She opened her eyes and saw the cigarette glow illuminate his face, and pulled the blankets more tightly around her. She felt and sensed the extreme hopelessness that came flowing out of him uninterruptedly. Coming in waves, and for a moment it seemed to compress the darkness, making it solid and impermeable even for words and thoughts.I understand, she tried to say, but the words wouldn’t come out. They stayed deep inside her. Frozen and meaningless.”
This could be Krapp listening to old tapes or the two of them, the killer and Moerk, just heads in urns unable to communicate with each other for the words of man and women fall short in the void…or the memories of Winnie in ‘Happy Days’…the open mouth of ‘Not I’…
For those that read mysteries for puzzles, this book will disappoint. But for those who have turned to crime novels because it seems to be the only venue left for originality, this book will please, nourish and give one a blessed pause to ponder. That’s what the best novels do..