“Some novelists hold a mirror up to the world and some, like Haruki Murakami, use the mirror as a portal to a universe hidden beyond it.”

Sent from my iPad Just finished First Person Singular by Haruki Murakami. Short stories
This book is made up of eight short stories. Some seem to be short tributes to things Murakami loves.
In one story, The Yakult Swallows Poety Collection, Murakami tells of his love for baseball, and his favorite team, the Yakult Swallows. Murakami would go often to the games and he would bring a glove in case a ball came his way. But he would also write short poems about the team, its players and the game. 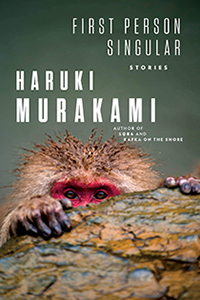 Music always plays a part in Murakami books and in this collection Charlie Parker and The Beatles are the themes for two stories. In Charlie Parker plays Bossa Nova, Murakami invents an album by Charlie Parker that was never recorded, and With the Beatles he writes about the one time he noticed a beautiful girl walking alone with the Meet the Beatles album tucked under her arm. Though he never meets her, he never forgets her. The story then tells us about an incident on a day when he goes to see his first girlfriend who isn’t home, so he spends time with her older brother.

There is also the strangeness that always exists in Murakami’s work. In the opening story, Murakami is invited to a piano recital by a passing acquaintance and when he takes the trouble to take the long bus ride to where the recital is to be held he finds the place closed and deserted and so he walks into town and meets a stranger and he recounts their brief, strange talk.
While I don’t think this collection is as strong as Men Without Women, it is still worth reading, just to enjoy Murakami’s beautiful writing. In my opinion, he is one of our greatest living writers.
Recommended.