“Expansive and intricate . . . touches on many of the themes familiar in Mr. Murakami’s novels: the mystery of romantic love, the weight of history, the transcendence of art, the search for elusive things just outside our grasp.”

This novel is the story of a portrait painter who happens to be the narrator of the story, who has just become separated from his wife. He leaves his home and goes on a mindless journey of driving up and down the coastline before he finally decides to settle down again. An old friend offers him his fathers home to live in. His father is a famous painter Tomohiko Amada, who is in a nursing home and no longer recognizes his own son. 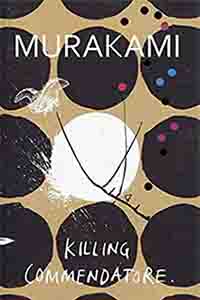 One day our narrator hears noise coming from the attic. When he investigates he finds that an Owl has taken up residence there, and in the corner of the attic there is a large package in the shape of a painting. Written on the package are the words Killing Commendatore. When he opens the package he finds a painting by Amada of a scene from the opera Don Giovanni of the killing of an officer.

Soon after the discovery of the painting the story quickly moves ahead to the man storyline which involves a secretive neighbor named Walter Menshiki and his obsession with a young 13 year old girl who lives directly across the way from his home. He believes that the girl may be his daughter. He will ask our narrator to paint her portrait so that he can get to know her.

Those who are familiar with Murakami’s work know that many times he will create a fantasy world alongside reality and in this story there is no exception. There will be the mystery of the bell that sounds in the middle of the night coming from somewhere in the forest, but most of all it will be the Amada painting. As the story surrounding the creation of the painting emerges, the characters in the painting take on a new importance.

Once again, Murakami has created wonders with his vivid imagination. However, at just over 700 pages not all readers will be comfortable with the story that starts in a world of reality and then in ways converges with a fantasy word which can be confusing as one tries to understand each and every nuance to this story. Murakami himself has said in interviews that to him it’s just a story that was in him and it’s not something to try and analyze too deeply. But it is so hard not to do that. For Murakami readers I highly recommend this book. If you are not familiar with his work, I would suggest reading his recent short story collection Men Without Woman. This will give you a good idea of his writing style before you invest the time in this large book.