” Fifteen popular Scout stories, carefully selected by the editor of Boy’s Life, who knows what boys everywhere like to read..”

An obscure book called “Boy Scout Stories” (by Irving Crump) was arduous to read. In fact, maybe that’s an understatement. Here’s why…

-The racism. I’m not one to get offended by a book, but when one villain is Mexican and the others are described as “dark-skinned”, I can’t help but feel uneasy.

-The lack of personality. The protagonists are Boy Scouts who do Boy Scout-ish things;  that’s all the character development you can expect. 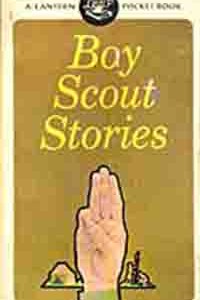 -The cheesy, dated dialogue. More specifically, I hated the hackneyed euphemisms and expressions the characters used, from “by jingo” (yes, really) to “swell idea”. Just…no.

-The writing itself was overblown.

-The lack of females. Yes, I understand that it’s centered on Boy Scouts, but there were only a few women or girls in the stories. Of the two who are important, one is five and gets trapped, while the older one in another story is portrayed as doing something stupid that the Scouts (of course…) fix.