“A totally new and original work that stretches his talents to their fullest. . .welcome back, champ.”

It has been some time since I last read an Asimov book, but even so, he remains my favourite writer of any genre. According to https://www.fantasticfiction.com/a/isaac-asimov/ Nemesis is the last novel he wrote as a standalone story, or without writing with another writer.

The story takes place in the 24th century, Earth is overcrowded but managing to plod along. Humanity has made its first attempt to a permanent presence in space in the shape seven Settlements, spherical habitations for around 60,000 people.

Already there is tension between Earth and the Settlements, with the latter thinking themselves better than the Earth-folk. In the Settlement called Rotor, an astronomer discovers a red dwarf star heading on a collision course for the Solar System and names it Nemesis. 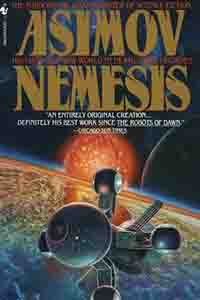 Janos Pitt decides it is time to head off into space towards the new star using ‘hyper-assistance’, a drive system developed on Rotor that allows travel at just below the speed of light. Earth and the other six Settlements don’t know about Nemesis or hyper-assistance, so they are left wondering what Rotor is up to. Nemesis is soon found heading their way and the race is on to find a way to save the planet, and its eight billion people.

Oh, what clever little pommy sod I thought I was! There I sat with my history degree and I thought, ‘I know, I’ll go for a degree in earth sciences and astronomy too’. Opps, I was defeat heavily by the maths involved, even the simplest of them. I just can’t ‘see’ them, let alone understand them. At that point I decided that I was done with the Open University. Then I found and began reading Nemesis, and there are passages in it which do major on maths, or at least the theory and results of not applying them correctly. Those passages were more Einstein knocking to some extent, and yes, I didn’t fully grasp what Asimov was saying, but it didn’t spoil things for me.

And so, another Asimov book leaves the TBR pile and joins the read shelf. OK, I’m biased when it comes to Asimov seeing as he’s my favourite writer, but I am also realist enough to see that Nemesis is not quite as good as his early work. Please don’t misunderstand me there, this one is worth looking for and buying and reading if you do find it. The copy I have is a 1990 reprint and is a bit tatty, so don’t expect a perfect book when you do find it.

Overall though, Asimov wrote another winner with this one. I enjoyed (math chat aside), and would encourage you to look for and read it. If you already own it, lucky you, you can have a re-read.