“Despite his disarming claim that this is the running commentary of a babbling drug addict, St James is a totally poised and entertaining host to his specialist subject: his book a splendid social anthropology of one of New York’s little-understood tribes.”

This is a non-fiction “true crime” account of the murder of a drug dealer by a notorious club kid in the mid-90s.

The book starts with Michael Alig telling James St. James (the author and his “best friend”) how he had murdered Angel. (A drug dealer). James then backtracks starting at the beginning; telling us the rise and fall of Michael and essentially the club kid movement.

This isn’t a “reporting” type book. This is James St. James memoirs of being deeply involved in the Club kid scene, an insider view – not an observer but an overly active participant in every aspect. It’s a trainwreck that you can’t turn away from. It is a drug-addled, narcissistic memoir full of moments that will leave you asking what did I just read? Is this for real? But yet he does it in a way that is somewhat enjoyable. I literally found myself mouth agape in awestruck horror at a few moments. It is not for the squeamish. If you are easily put off by excessive drug use (cocaine, heroin, etc) and debauchery then this is not for you. 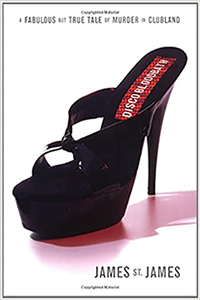 I was a teenager when the club kids gained popularity. I remember watching the episodes of Donohue and Geraldo that the author mentions being on. It was fascinating. After reading this I have a whole new perspective. I’ve read memoirs by rock bands that featured excessive drug use, but this was a whole new level of ‘oh my god’. Saying that, I did fly through it. I found it easy to read and humorous at times. After doing a little research, I learned they did make a movie from it – Party Monster starring Seth Green and Macaulay Culkin.