“The wit of Jane Austen has for partner the perfection of her taste. Darcy and Elizabeth are two of the greatest characters in English Literature.”

I’m sure that I first read “Pride and Prejudice” in high school because I read a lot then, but I don’t remember being blown away by it until I had to read it for a college class. I stayed up all night reading it and then missed the class. Anyway, at that time, I remember thinking just that I really liked it; but then I started noticing that I was reading an incredible number of books that were written during or were about the Regency period of British history. What an incredibly fertile period of British literature!

I’m 68, so it’s kind of hard to remember the exact order of things, but I discovered Georgette Heyer at some point and read every single novel that she wrote that took place during this time period. I also read Patrick O’Brian’s Jack Aubrey/Stephen Maturin twenty-book series during the last ten years (the greatest historical novels ever) and am now re-reading them. 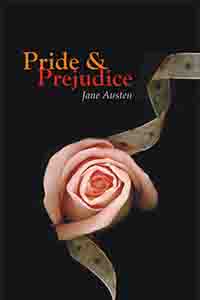 I began to realize that Jane Austen had influenced not only me but an awful lot of authors. I have re-read her all too few novels countless times and find it unbelievable that anyone could not like “Pride and Prejudice.” Elizabeth Bennet and Darcy are irresistible archetypal characters! Who could not identify with Lizzy, with her insufferable mother, her remote father, and her cramped and suffocating world?!? Everyone has felt the same way at some point, especially in adolescence and early adulthood.

Darcy represented everything that Elizabeth was denied but which she also despised. We can all identify with her rejection of Darcy’s condescension and snobbery but also be humiliated by her horrible mother, educated but insensitive father, and idiot siblings. Elizabeth’s experiences belong not only to the early eighteenth century but to any young woman’s experience, so what’s not to love?

Pride and Prejudice is a wonderful piece of writing that has been read and reviewed numerous times. Because of its very fame and popularity, there’s very little to add to what has been already said about it; it has acquired the nature of the elephant which the blind men are trying to describe. Let me try and explain the background assumptions in my view of the book, and if you disagree you can simply stop reading right away.

It is among the very earliest novels that fall more or less comfortably within the genre, so when it was written, we can assume that Jane Austen had few models. This is good, because she would not have been preoccupied with trying to break the mold, nor would she have been lulled into proceeding on autopilot.

It is difficult to know to what extent Jane Austen viewed her writing as ‘Feminist’. Today, we see this novel as broadly feminist, but it is arguably just a novel, even if it is worthy of being embraced into the Feminist library for subtle reasons that I’m not sure I can explain. I’ not even sure what a novel is, anymore; a novel, in my view, is an extended piece of fictional writing in which at least some of the characters can be seen to evolve in response to each other, and their changing circumstances, and the environment in which they find themselves. Using that description, no one can deny that any of Jane Austen’s books is indeed a novel.

We know–or at least, we are told– that Jane Austen was somewhat reclusive. This is interesting; we have to take all these assessments with a pinch of salt, because the estimate of the personality of someone a couple of centuries removed from us has to be judged based on what we believe their expectations were. If Jane Austen preferred to write, rather than to fulfill the expectations of her family circle, given that she observed everyone around her with a very sharp eye, it would have been seen as reclusiveness, whereas today the phenomenon is common behavior, and nobody remarks on it. At most, we can believe that Jane Austen wished to have substantial control over her environment, which might have been unusual in a woman of those times.

Now to my review.

What comes across in every bit of the novel is _warmth_. It is impossible for an author to write at all about things they do not care about. (Some do, amazingly, lured by the financial rewards, but such authors should be hunted down and exterminated.) Jane Austen’s love for the family of Elizabeth is clear, and we must use our judgement to infer whether the author loved her own family just as much, or whether she created this artificial family on which to bestow her love. I would go with the former, judging from the few other Austen books I have read; in every case she depicts the family of the female protagonist as sympathetic. Even when Austen is being critical, most times, it is the exasperation of one who expects more, rather than the disgust of one who anticipated the worst, and wasn’t disappointed.

In Austen’s novels, as in most good novels, you see the sheer power of her observation. The eyes and the ears of a novelist are amazing tools, and the urge to write is, in large part, the imperative that flows from a mass of observation that demands an outlet. How many of the experiences she represents in her books are first hand we cannot know; they’re probably mostly stories that she got from the newspapers or from gossip. But it is possible to put together a story about strangers, and a few persons you know personally, and give life to the thing, and it is as if you had watched it taking place.

My criticism of Pride and Prejudice, specifically, is that I feel that Jane Austen really did not have much insight into the psychology of men her own age. At any rate, Darcy comes across to me as a bit of an idiot, though most of the other men in the story function pretty well at the caricature level, or perhaps just outside it. Given what we know of the social conditions of that time (which is a good amount, but obviously not everything), it is easy to see that men acted in ways that would have been inexplicable to rational women of the time, and women had to work really hard to fill in the gaps.

What emerges most of all is a picture of a woman of intelligence and sensitivity, curbing her frustration with the mental blinkers that most people wore at that time, with considerable effort, and fair success. In the end, she has to be satisfied that the people that mattered to her knew her well enough; there wasn’t much she could do about the rest of them.