“Wonderfully atmospheric, The Dry is both a riveting murder mystery and a beautifully wrought picture of a rural community under extreme pressure.”

Crime novels/murder mysteries have evolved dramatically over the years and how! And while many a times, an author’s attempt to try something different results in a meh read, this is one of the exceptions where it works brilliantly because of the ingenuity of the plot and a dark-ish sort of climax.

The setting is perfect- drought affected Aussie countryside resulting in people in a state of permanent despair; and a family shot to death (presumably by the head of the family himself- Luke). There are some hidden closets associated with Luke. 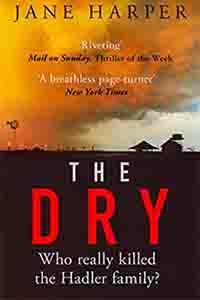 Enter Aaron Falk(now a policeman in Melbourne), Luke’s childhood friend, who was exiled from the village as a teenager after the mysterious death of their friend ‘Ellie’. What is the truth? Is there any connection between the two tragedies separated by 20 yrs? How can Luke shoot his wife and kid before shooting himself?

Aaron Falk decides to take some time off his job and investigate the matter unofficially with the help of the local police guy and realises that people have still not forgiven him for what he allegedly did 20 yrs ago. There are a number of characters in the story and all of them come across as very original and believable. And while the first half of the novel maybe described as a bit slow, the latter is absolutely brilliant and holds you on tenterhooks. The ending albeit sad is triumphant and elevates this book from just ‘good’ to ‘awesome’.

Thoroughly enjoyed it and would recommend it to everyone!

A TINDER DRY LAND, A TOWN BRIMMING WITH SECRETS AND A TALE OF FOUR UNEXPLAINED DEATHS

Right from the first gripping opening lines of the prologue, Jane Harper’s graphic prose grabbed my attention, bringing with them images of the vast and often merciless countryside which, from the description, is located not far from the rural Victoria township this reviewer is about to call home.

An unexplained death from decades earlier, and now three new ones – and with more than a hint of suicide attached … or was it from something just as tragic but far more sinister?

The Dry has more than enough suspicious characters to keep a reader guessing as to what the chances are that the demise of a young family was undertaken by a revengeful murderer as the most logical explanation, even though all the signs point to a murder/suicide scenario. With a dry season up there with the best of them and causing all sorts of hardships for every single one of the weather-dependant farmers in this rural district, it appears Luke Hadler decided to take the fate of his young family into his own hands – at the pointy end of a gun.

When Aaron, Luke’s closest friend from childhood days, comes back to pay his respects, the whole town looks on him suspiciously. Memories of an unsolved murder of one of their closest friends – Aaron’s former sweetheart – still play on their mind. Everyone knows something suspicious happened that night between the boys, but just what and where it fitted into Ellie’s death is still a mystery nearly twenty years later.

Decades old continually festering wounds are split open and raging hatreds rise up on several fronts when, at the request of his old friend’s grieving father, Aaron decides to take off his cap of mateship and put on the navy blue and white one from his policing job in the city to investigate several facts that just don’t add up. Nearly every resident of this small town seems to have a dark secret in some form or another and it is up to Aaron and the local copper to get to the bottom of them all, even though he has several of his own, which doesn’t bode well with a few nasty characters.

And just when you think you’re starting to figure it out, along comes an unexpected cat among the pigeons … and from the most unlikely of places.

A most intriguing and satisfying read.